He brings a lot of energy to the side: Jasprit Bumrah on Virat Kohli

Indian fast bowler Jasprit Bumrah has praised captain Virat Kohli, stating that he always backs the bowlers and encourages them. Bumrah also added that Kohli’s presence brings a lot of energy to the side. The 28-year-old fast bowler was India’s star performer on Wednesday. He claimed 5 for 42 in South Africa’s first innings in the Cape Town Test. The Proteas were bowled out for 210 as India gained a slender 13-run lead

For Bumrah, the occasion was all the more special since the performance came at the same venue where he made his Test debut in 2018, also under Kohli. Speaking at the end of the second day’s play, the fast bowler said, "I made my Test debut under Virat Kohli, it is always wonderful. He is always there to back us and he always gives all the bowlers a lot of motivation. He brings a lot of energy to the side. It is always good to play under him.”

Bumrah added, “It has been special as I started my Test journey in Cape Town and then to come back here, I am very happy. Personal performances are always good but when you give impact performances, that gives you more satisfaction." 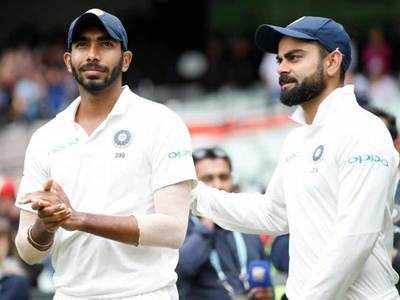 There was some criticism of India’s lead bowler after he failed to deliver in the previous Test in Johannesburg. South Africa chased down 240, losing only three wickets. According to Bumrah, he is following the same process over and over again although the results may vary.

The pacer, who represents Mumbai Indians in the IPL, added, "There is always a lot of noise but the success, whatever comes is a byproduct. So basically what I try to do is have a routine and follow it again and again. Someday I would get a wicket, someday someone else would get the wicket

"We as a unit want to focus on our routines, there will be doubters but that is something an individual has to decide. When I have paid attention to outside noise, it does not help. I try to control what is there in my control," Bumrah continued.

The fast bowler refused to point out a specific total India would be happy defending in the fourth innings. Asked about the same, he replied, "Obviously, there is no magic number that I can say right now that this is the magic number. We will have to assess the wicket quickly. We have bowled on it, it is a new ball wicket. There is some seam movement with the new ball and as soon as the ball gets older, seam goes down and it gets easier. It would be important for us to have good partnerships."

India will resume their second innings on 57 for 2, with a lead of 70. Virat Kohli is batting on 14 and Cheteshwar Pujara on 9.