Aussie ODI team is a work in progress

Australia may not be the force they once were in world cricket, but they remain competitive nonetheless.

Australia may not be the force they once were in world cricket, but they remain competitive nonetheless. Even so, in the series against England in England, and in the one-dayes so far in the UAE against Pakistan so far, their limitations as an ODI team have been exposed. They did win the first game against Pakistan, but that was a far from convincing victory. The batsmen’s struggles against spin, Saeed Ajmal in particular, have been visible. While they got away with it in the opening game courtesy a lacklustre batting performance by the Pakistanis, fortunes turned in the Friday-Saturday match. 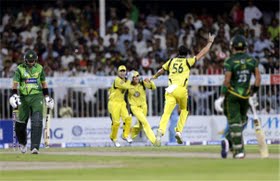 Whatever the result of the ongoing series, one thing is clear that this current Aussie squad is a work in progress. Under challenging conditions, they are as vulnerable these days as any other ODI side in the world. In England, where they ball moved all around, they were troubled, and again in the UAE, the assistance the Pakistan spinners are getting is hindering Australia’s progress. If they want to win the series now, they either need to put up a much better batting performance, or hope Pakistan crumble like they did in the opening ODI of the series.

One of the chief factors why this current Australian one-day outfit is struggling is because of the lack of experience of their players in varied conditions. Except for Michael Clarke and Michael Hussey, none of the other players have developed the expertise of succeeding in any given conditions as yet. David Warner is exceptional when he performs at home, and in touring nations that have similar playing conditions. But, despite his regular IPL stints, he has been totally off colour in the UAE so far. A 68-ball knock at a strike rate of 35 is unacceptable in one-day cricket.

With Brad Haddin no longer part of the scene, Mathew Wade his trying to establish himself as the country’s number one wicket-keeper. And while he has done a commendable job till now, Australia might have to rethink their strategy of getting him to open the innings and then keep wickets for 50 overs. The Aussie fielders and bowlers had a miserable time under the sapping heat, so imagine the horror Wade might have gone through in the two games. It also has to be remembered that the wicket-keeper hasn’t experienced such conditions before, and is still trying to come to grips with the same. The dilemma for Australia unfortunately is that if not Wade, who?

To their credit Glenn Maxwell and George Bailey have performed efficiently despite their lack of expertise at the international level. These are two men who could go on to have a long career with the Aussie ODI side. It will be too unfair to be critical of Australia’s one-day performances in recent times since they are still trying to figure out replacements for Ricky Ponting and Shane Warne among others. For the moment, if the players are putting in their best effort, Clarke should be content. There is no doubt that Australia have a talented bunch, and if they keep improving positive results will follow.