Both South Africa and Sri Lanka have qualified for the Super Eights stage of the tournament, following the drubbing they handed out to Zimbabwe in their opening game. As such, a defeat wouldn’t alter their fortunes in this series.

Both South Africa and Sri Lanka have qualified for the Super Eights stage of the tournament, following the drubbing they handed out to Zimbabwe in their opening game. As such, a defeat wouldn’t alter their fortunes in this series. Still, both teams would be keen to put up a victorious show, not only to boost their confidence, but also gain the desired momentum going into the next round. Even though South Africa and Sri Lanka steamrolled the Zimbabweans without much trouble, too much cannot be read into that performance since their opponents were rather ordinary. The case won’t be the same when they take on each other though.

Sri Lanka would be bolstered by the performance of their main spinner Ajantha Mendis. He bamboozled the hapless Zimbabweans with his Sri carom balls and googlies, and his figures of 6 for eight would take some effort to be bettered. Although South Africans would not be expected to succumb so easily, the Lankans would be aware that the Proteas have a history of struggling against spin, and would be keen to capitalise on the same. The all-round effort of the other Mendis, Jeevan, will also have encouraged the home side. 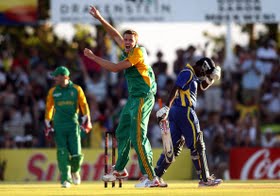 In a sense, Sri Lanka were lucky that they got a chance to take first strike against Zimbabwe. It gave their batsmen an opportunity to spend some time at the crease. Dilshan Munaweera, Tillakaratne Dilshan and Kumar Sangakkara, all got some valuable hitting in the middle. Had Zimbabwe batted first and capitulated to a paltry total, Sri Lanka’s wouldn’t have got too much batting practice. Since almost everything went right for them against Zimbabwe, the hosts wouldn’t be keen to tinker with their eleven. If anything, they might ponder upon playing rookie off spinner Akila Dananjaya considering South Africa’s weakness against slow bowling. Seems like a far-fetched thought though.

Like Sri Lanka, the Proteas also registered a comprehensive win against the Zimbabweans. However, unlike the hosts, their batting line-up wasn’t tested. While opener Richard Levi’s return to form will undoubtedly please the management, the fact that only two of the batsman – Levi and his opening partner Hashim Amla – got a look in during the team’s opening game could be a cause of concern for South Africa. Remember, in past World Cups as well, the South Africans have been dominant with the bat, but it has also meant that the latter batsmen don’t get enough opportunities, and when the crunch time comes they are found out.

For now, South Africa can focus on their positives. Dale Steyn bowled with some genuine pace while Jacques Kallis proved that, in spite of the number of injuries, he is not finished with the ball yet. Just like Sri Lanka, they have a settled outfit with Kallis, Villiers, and Duminy fitting into the middle-order. If anything, their lower-order could be susceptible. Farhaan Behardien is as yet untested, Albie Morkel unpredictable and Johan Botha and Robin Peterson capable but far from dangerous batsmen.