Sri Lanka were bundled out for a poor total of 156 in the Boxing Day Test against Australia at the Melbourne Cricket Ground. Mahela Jayawardene’s decision to bat first at the MCG backfired as the Sri Lankans got decimated in just the 43.4 overs.

Sri Lanka were bundled out for a poor total of 156 in the Boxing Day Test against Australia at the Melbourne Cricket Ground. Mahela Jayawardene’s decision to bat first at the MCG backfired as the Sri Lankans got decimated in just the 43.4 overs. By the close of the first day’s play of the Second Test, Australia are already into the driver’s seat at 150 for 3, just another six runs to score before they can pile up their first innings lead. 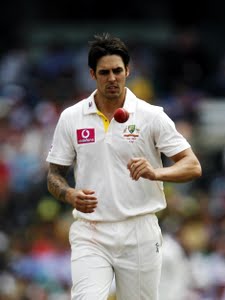 The opening day’s play saw a historic moment when Kumar Sangakkara became the second ever Sri Lankan to go register 10,000 runs in Test Cricket. The first to achieve the feat was the present Captain Mahela Jayawardene. Sangakkara overall became the 11th player in the history of Test Cricket to cross the 10,000-run milestone. The southpaw was also the top scorer of the disastrous Lankan innings with a 98-ball 58 (with 8x4s) before getting brilliantly caught by a backward running Matthew Wade off a top edged hook induced by Mitchell Johnson.

Sri Lanka never could recover in their innings which was rocked by a 4-wicket haul from Mitchel Johnson who also went onto force Wicket Keeper Prasanna Jayawardene out of the match with a fractured thumb. Australia’s debutant pacer Jackson Bird, Peter Siddle and offie Nathan Lyon chipped in with two wickets each.

Australia batted out 39 overs before the close to nearly knock off the Lankan first innings total. David Warner blazed away for a 46-ball 62 with 6 fours and a six. His opening partner Ed Cowan scored 36 in a 92-run opening stand. At Stumps, the Aussies have Shane Watson on 10* and Skipper Michael Clarke on 20*. The Australian Captain had earlier passed a fitness test having recovered from a hamstring injury. The wicket takers for Sri Lanka were Dhammika Prasad and Angelo Mathews while there was a wicket falling through a run out.