Champions League is an Acid Test for Sachin Tendulkar

Under huge pressure to show that he is still good, Sachin Tendulkar is without any doubt facing an acid Test in the ongoing Champions League T20 2012 in South Africa.

Under huge pressure to show that he is still good, Sachin Tendulkar is without any doubt facing an acid Test in the ongoing Champions League T20 2012 in South Africa. Tendulkar has already flopped in Mumbai Indians’ opening match against the Lions yesterday at the Wanderers consuming as many as 24 balls for his 16.

Tendulkar had to face the music against the tearaway quicks Dirk Nannes and Chris Morris who kept him tied down with their pace and bounce. The veteran was just good enough to use their pace to tuck and nudge the ball around. More often than not, Sachin seemed to be done in by the extra pace off these two fast bowlers. The Master hit two boundaries in his stay that lasted 8.4 overs – one a steer behind backward point off Sohail Tanvir and the other an unconvincing slog straight down the ground off spinner Phangiso. 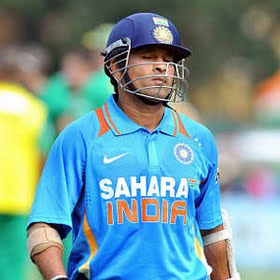 It was a disappointing end to Sachin Tendulkar’s stay in the middle as he got bowled out for the fourth time in a row in a competitive match. This time it was different as he got bowled to a spinner after attempting a big slog sweep but failing to cover his stumps!

Sachin’s painstaking knock of 16 from 24 balls did no good for the Mumbai Indians as they could only muster a modest total of 157 on a good batting pitch. The Lions chased down the runs with ease losing only a couple of wickets. Sachin will get four more chances to prove himself in the remaining league stage matches for the Mumbai Indians. We should be getting a clear idea by then on whether Tendulkar is still capable enough to play for India or is now just a pale shadow of himself. Fortunately, it is not Team India that is made to pay for Tendulkar’s enjoyment of the game this time but the Mumbai Indians. We will see if the Master can pull off some vintage stuff or not in the coming days. Remember, Tendulkar himself has admitted that he would be reassessing his career next month.

Although the CLT20 may not be an important event for the Indian fans, it serves the purpose of watching players like Sachin Tendulkar, Unmukt Chand on what they can offer against quality bowling attacks on nice pacy and bouncy South African pitches. Unmukt Chand has shown his good footwork and beautiful timing so far in the one match he got to play for the Delhi Daredevils against Chennai Super Kings. Now the onus is on Tendulkar to show the Indian fans that he is still better than all these young talents even now.