At the end of the third day's play at Lord's, New Zealand seemed to hold all the aces. They had taken a significant first-innings lead and had also picked up a couple of key second-innings England wickets.

At the end of the third day's play at Lord's, New Zealand seemed to hold all the aces. They had taken a significant first-innings lead and had also picked up a couple of key second-innings England wickets. The hosts however fought back courtesy their dogged skipper Alastair Cook and newfound hero Ben Stokes. The dramatic turn around was complete on the final day when their bowlers rose to the occasion, and delivered telling blows to knock out New Zealand. The day began with Cook carrying on to reach 162 before becoming one of Boult's victims. The New Zealand fast bowler went on to dismiss the tail in no time, but by the time England had set New Zealand an improbable 345 to win. 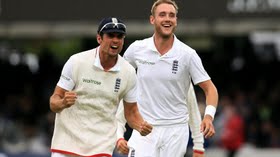 The Kiwis were expected to put up a fight, but England were on top right from the beginning. New Zealand needed a confident start, but instead were delivered big blows as both openers were sent back without scoring. James Anderson and Stuart Broad got into the act right away for the hosts. Martin Guptill edged Anderson to slip to become the latter's 399th victim. At the other end, Tom Latham was lbw to Broad's first delivery. Broad also trapped Ross Taylor lbw. Kane Williamson hung around for a while, but on 27, and with the score on 61, Ben Stokes got him to push at a wide delivery, and had him caught at gully. Very next ball, Brendon McCullum played on. At 61 for 5, only one side was winning.

Although the match seemed well out of Kiwis' grasp, New Zealand are not one to go down without a fight. Corey Anderson and BJ Watling ensured the same. Both came up with fighting half-centuries to give the New Zealand innings some respectability. Continuing to bat with injury, Watling came up with another dogged knock. Anderson, on the other hand, took a Stokes-like aggressive approach, and three consecutive fours off Moeen Ali took him to a half-century at quicker than a run-a-ball. Anderson and Watling added 107 for the sixth wicket to give the visitors faint hopes of survival. However, impressive debutant Mark Wood produced a brute that brushed Watling's glove while Joe Root's golden arm accounted for Anderson.

Once the partnership was broken England had it rather easy. Stokes continued his great match, picking up the wicket of Mark Craig. Off the very next ball, Mooen took a brilliant return catch off Southee. Moeen played a crucial role in the Test-winning dismissal as well. Boult and last man Matt Henry had negotiated eight nervous overs, and England were beginning to get desperate. However, Broad put those worries to rest by digging one in short, which had Boult upper-cutting one straight to third man positioned there by Cook.

The England triumph completed a remarkable Test for both sides where the sides literally took turns to dominate. The win is a massive boost for England, especially after all that had transpired in the preview to the series. As for New Zealand, it was an opportunity lost, but their fighting spirit remains in tact.