In the second part of T20 clashes between India and Pakistan we look back at the most recent encounter between the two sides, held at the Premadasa Stadium in Colombo in September this year as part of the ICC World T20 2012.

In the second part of T20 clashes between India and Pakistan we look back at the most recent encounter between the two sides, held at the Premadasa Stadium in Colombo in September this year as part of the ICC World T20 2012. 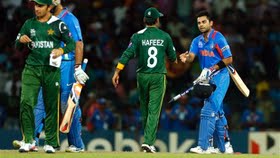 Pakistan won the toss and chose to bat. However, it was a decision they could not justify. Right from the start, they kept losing wickets at regular intervals and never recovered. The dangerous Imran Nazir was the first to go, trapped lbw by Irfan Pathan for 8. The move to promote Shahid Afridi to number three did not work either. After hitting a couple of boundaries, he threw his wicket away, like always, for 14. Pakistan slumped further when Yuvraj Singh had Nasir Jamshed and Kamran Akmal caught behind in quick succession to leave them reeling at 49 for 4.

Pakistan’s hope of revival now rested on the shoulders of their skipper Mohammad Hafeez. After hanging for around for 28 balls for his 15 though, he was cleaned up by Virat Kohli. The only resistance from Pakistan came in the form of a partnership between Shoaib Malik and Umar Akmal. The duo took the score from 59 to 106 before Ravichandran Ashwin dismissed both in quick succession to put India back in the driver’s seat. Malik made 28 off 22 balls while Umar contributed 21 off 18 balls. Pakistan were dismissed for a disappointing 128 with Laxmipathy Balaji running through the tail.

The only way Pakistan could have won the game was if their bowlers got some early wickets. Raza Hasan did exactly that having Gautam Gambhir caught and bowled for a duck in the very first over. The steadying partnership between Virender Sehwag and Kohli all but sealed the game in India’s favour. The Sehwg-Kohli alliance took the score to 75 in the 11th over before Afridi gave Pakistan some consolation by having Sehwag caught by Umar Gul. The Indian opener contributed 29 off 24 balls with four boundaries. India were in the driver’s seat by now.

Even after Sehwag’s dismissal, Kohli continued to go after the Pakistani bowlers and remained until till the very end. The India number three looked in no trouble at all during his unbeaten 78. He slapped eight fours and two sixes during his 61-ball stay to guide India home by eight wickets. Yuvraj Singh helped himself to an unbeaten 19 off 16 balls. Except Raza Hasan, none of the Pakistan bowlers could make an impression on the Indian batsmen. Not surprisingly, Kohli ended up being the man of the match.