At the start of the third T20 at Abu Dhabi, it was clear to all that the only way West Indies could compete with Pakistan in the match was if their batting somehow stood up to the tough bowling on offer. But,

At the start of the third T20 at Abu Dhabi, it was clear to all that the only way West Indies could compete with Pakistan in the match was if their batting somehow stood up to the tough bowling on offer. But, for the third match in a row, that was not to be the case, as West Indies batsmen struggled to come to terms with the conditions. They had no idea how to deal with the spinners on the slow, low conditions. It cost them the match and, before that, the series. Pakistan, on the other hand, preyed on West Indies' weakness, knowing exactly what they needed to do to clean sweep the series.

Looking back at the match, the first five overs pretty much sealed the fate for West Indies. Batting first, they were desperate for a strong start. Instead in a hat-trick of sorts, they crumbled for the third time in a row. The Windies needed Johnson Charles and Andre Fletcher to provide them with a strong opening. But, Charles perished to Imad Wasim while Fletcher lost his wicket to a run out following a mix-up. On expected lines, West Indies made a change, bringing in Chadwick Walton for Ewin Lewis. But, he too succumbed to the guile of Wasim. A lot depended on Dwayne Bravo, but his dismissal left the visitors reeling at 31 for 4.

Marlon Samuels ended up being the top scorer for West Indies in the innings, making 42 from 59 balls. But, his knock out was a clear illustration of how not to bat under the given conditions. Samuels hit only three fours during his stay at the crease, and scored at a low strike rate of 71. With the boundaries not coming, Samuels should ideally have looked to rotate the strike. But, he is someone renowned for not doing that, and the lack of adaptability was on show again. The performance of Kieron Pollard was another indicator of how much West Indies struggled. Pollard failed to hit a single boundary during his 17-ball stay at the crease. 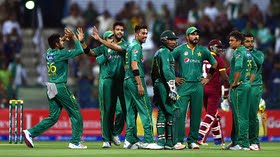 For Pakistan, their bowling was again the standout aspect of their game, which led them towards the whitewash. Left-arm spinner Imad Wasim has been nearly unplayable, and the struggling Windies succumbed to his guile again. Sohail Tanvir, Mohammad Nawaz and Mohammad Amir all kept things tight while debutant Rumman Raees had an easy introduction to T20 cricket, giving away only 10 in his three overs. Pakistan will be extremely pleased with the manner in which the bowlers have performed in the series.

Thanks to the bowling success, the batsmen really haven't had much to do. At Abu Dhabi, with less than six to chase, the task was even simpler. Sharjeel Khan again fell early, probably the only disappointment for Pakistan in the series. But, the in-form Shoaib Malik, Khalid Latif and Babar Azam combined to take Pakistan home. The hosts were under no pressure in the chase, but they were further aided by some shoddy bowling from the inconsistent Jerome Taylor. With not much runs to play with Sunil Narine and Dwayne Bravo could not do anything to prevent a whitewash.