Mayank Agarwal, who has been in scintillating form for India A this season, continued his splendid run, as India A thrashed South Africa by eight wickets in the practice T20 in Delhi. Chasing a tough 190 for victory

Mayank Agarwal, who has been in scintillating form for India A this season, continued his splendid run, as India A thrashed South Africa by eight wickets in the practice T20 in Delhi. Chasing a tough 190 for victory, India A eased home with two balls to spare as Agarwal smashed 87 in 49 balls, and shared a match-clinching stand of 119 for the opening wicket with Manan Vohra, who contributed 56. Earlier, JP Duminy smashed an unbeaten 68, and Faf du Plessis made 42 as South Africa blasted the Indian bowlers. Agarwal proved too good for their bowlers though.

Mayank and Vohra's rollicking stand, which lasted a little under 13 overs, pretty much sealed the deal for India A. The South African pacers just could not get their length right under the humid conditions. The pace trio of Kylie Abbott, Chris Morris and Kagiso Rabada could only watch in admiration as Mayank and Vohra took the attack to them. South Africa's chances of a victory evaporated rather quickly in the face of the assault. The cut and pull shot were the favoured ones of the duo as the fast bowlers clearly got their lines wrong.

Things did not change much even after spin was introduced as both the leggies, Imran Tahir and Eddie Leie went for plenty as they, like the pacers, could not exercise any sort of control. Mayank was particularly aggressive against Leie as was the case during last month's tri-series final. The deadly partnership was finally over when Vohra fell for 56 from 42 balls, hitting eight fours and a six. By the time he was dismissed, India A were well and truly on the path of victory. Mayank and Sanju Samson then featured in a half-century stand for the second wicket. Mayank was approaching a deserving hundred when he fell trying to hit out against Merchant de Lange. Samson and skipper Mandeep Singh completed the formalities. 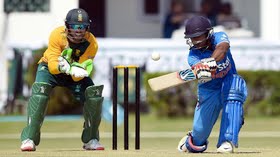 South Africa's batting performance earlier in the day was much more impressive. After losing Quinton de Kock for a duck in the first over, the Proteas recovered excellently courtesy AB de Villiers, who made 37 from 27, and du Plessis, who made 42 in the same number of balls that de Villiers faced. While de Villiers was dismissed by Kuldeep Yadav, du Plessis retired. His retirement allowed Duminy to blossom. The southpaw hit as many as six sixes apart from his two fours in an unbeaten 68 that needed only 32 balls. At the break, it seemed like a daunting task. But, Mayank and Vohra certainly did not think so.