NZ vs SA: Exciting finale on the cards at Durban

With the three match one-day series between New Zealand and South Africa tied 1-1, the teams have everything to play for in the final ODI at Durban on Wednesday. South Africa won the opening match on the back of a superlative hundred from Hashim Amla

With the three match one-day series between New Zealand and South Africa tied 1-1, the teams have everything to play for in the final ODI at Durban on Wednesday. South Africa won the opening match on the back of a superlative hundred from Hashim Amla, but New Zealand fought back courtesy their bowlers and Martin Guptill, to square the series in the second game. On recent form, the Kiwis would like to believe that they have a slight advantage. They also have a better batting unit as compared to the hosts. But, South Africa too would back themselves to do well. They have the players and know the conditions well too. 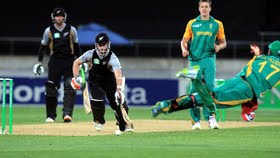 New Zealand were excellent at Potchefstroom after South Africa won the toss and decided to bat first. The conditions were to the liking of the visitors, who took full advantage of the same by taking the pace off the ball. Doug Bracewell stood out with his three scalps. Not only was he among the wickets, but also maintained pressure with an impressive line and length. Adam Milne also played a key role dismissing the openers cheaply. Grant Elliott may not be an accomplished bowler, but even he has been doing a decent job, breaking partnerships. New Zealand would like to continue their good work in the field.

Although the Kiwis lost the first match, their batting has been highly impressive in the series so far. Martin Guptill batted with ease for his hundred while Tom Latham chipped in with a good knock as well. Their opening stand pretty much won New Zealand the second ODI. In the absence of Brendon McCullum, Kane Williamson will be expected to deliver especially if things begin getting tense. New Zealand did not need the services of their middle and lower order in the last game. But, if needed, they would want the likes of Elliott, Luke Ronchi and Colin Munro to fire, all of whom all capable of match-defining knocks, and have done so in the past.

For South Africa to do well, they will need to show marked improvements in comparison to Potchefstroom. Hashim Amla roared back to form with a hundred in the opening ODI, which is a positive sign. However, the team management will be extremely worried with the lack of runs from the bat of Morne van Wyk. Will they risk changing the opening combination in a must-win game. An equally bigger worry, perhaps even more, would be the performance of their skipper AB de Villiers. He just hasn't looked his real self so far. That said, he can be expected to leap back to form in no time. It remains to be seen what South Africa do with David Miller, who has got stuck in a rut of sorts.

South Africa's bowlers did not have much to do in the second match as they were defending just over 200, but even in the first match, where their batsmen scored 304, they allowed New Zealand to come within 20 runs of that score. Dale Steyn, their leader, hasn't been highly effective so far while Vernon Philander was only economical in the last game without being threatening. The experiment to open with Aaron Phangiso was an interesting one, but he kept things tight, at best. Imran Tahir was the one who made the most impression. But, he was unlucky as the fielders did not support him well. South Africa need to improve significantly in that sense.