As many as 15 wickets went down on the opening day’s play of Ashes 2013 as the ball wobbled all around under cloudy conditions at Nottingham. Hosts England hold the edge after reducing Australia to 75 for 4 by Stumps on Day 1.

As many as 15 wickets went down on the opening day’s play of Ashes 2013 as the ball wobbled all around under cloudy conditions at Nottingham. Hosts England hold the edge after reducing Australia to 75 for 4 by Stumps on Day 1. The visitors have no doubt lost the initiative of bowling out England for a modest 215.

Peter Siddle claimed a five-wicket haul as underdogs Australia were all over England most of the day. England bounced back though with Steven Finn taking two wickets in two balls and James Anderson with his magical swing bowling complementing him well with a couple of wickets at the other end. Anderson also removed the big fish Michael Clarke whose off stump was pegged back with a magical late outswinger.

England got their first wicket in the 4th over itself with Shane Watson edging a rash drive off Finn to third slip. Ed Cowan was out for a first ball duck playing a rubbish drive away from his body to leave Finn on a hat-trick which the tall fast bowler missed. Anderson joined the party to clean up Clarke and then by stumps having Chris Rogers lbw.

Batting was tough to say the least as the ball seamed and swung around. Not a single batsman from either teams got to a fifty. Jonathan Trott was the top scorer of the day with 48 while Steven Smith has looked promising for the Aussies with an unbeaten 38. 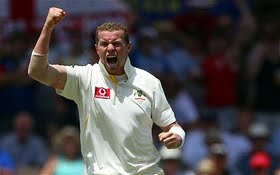 England took the bold decision of batting first in overcast conditions and it was Skipper Alastair Cook letting his team down by playing a poor drive away from his body to nick Pattinson in the 9th over. England were steadied after that by Joe Root and Jonathan Trott before the partnership was broken by a Peter Siddle yorker that cleaned up the young opener. Root finished with 30 and England a while after that went to lunch at 98 for 2 in 26 overs.

After lunch, Siddle struck again when Pietersen (14) played a loose drive to get caught in the slips. Siddle got one more wicket in no time when the well set Jonathan Trott dragged a drive onto the stumps having scored 48. England was in trouble at 124 for 4. A fighting partnership seemed to be on the cards for the 5th wicket before Ian Bell (25) nicked Siddle to the slips with England having 178 runs on the board.

England collapsed to 215 in 59 overs just after Tea. Jonny Bairstow with 37 and Stuart Broad with 24 got some crucial runs to get England to some sort of respectability. Peter Siddle finished with 5 for 50, which was his 8th five-wicket haul. Pattinson chipped in with three wickets while Starc got a couple of scalps.

Toss and Teams: Hosts England have won the toss and elected to bat first in overcast conditions in the opening Ashes Test at Trent Bridge in Nottingham. While the English team is on expected lines, the Aussies have taken a bold decision of giving Test Debut to 19-year-old left-arm spinner Ashton Agar. Nathan Lyon finds himself warming the bench.