Indian skipper Virat Kohli has captained both Yuzvendra Chahal and Parveez Rasool in the Indian Premier League. As such, he is hopeful of the spin duo coming good in the three-match T20 series starring on Thursday.

Indian skipper Virat Kohli has captained both Yuzvendra Chahal and Parveez Rasool in the Indian Premier League. As such, he is hopeful of the spin duo coming good in the three-match T20 series starring on Thursday. Speaking at the pre-match conference, Kohli, who has been chosen for the Padma Shri, opined that the England series is a great opportunity for the duo to establish themselves as specialists in the T20 format.

"The guys who have come in have done pretty well in the IPL, in the domestic T20s. The areas they are bowling in are pretty good and are pretty economical. Yuzvendra, everyone has seen his performances, even Rasool played under me at RCB,” Kohli said. “It is probably a breakthrough series for them. They haven’t played a big series yet so this might be the perfect opportunity to seal their spots as T20 specialist spinners for the future,” the Indian skipper went on to add.

Speaking specifically about Rasool, the Indian captain said that the J&K cricketer has the ability to bowl with the new ball as well. “He is pretty confident, he can bowl with the new ball against the most attacking guys. These two guys are very smart about their bowling. I am sure they will able to replicate their domestic success at this level.”

The T20 series also mark the return to international cricket of Suresh Raina, who has run out of favour in the ODIs as well. The southpaw hasn't played a match since the World T20 in March, but Kohli still believes Raina has a lot to offer. 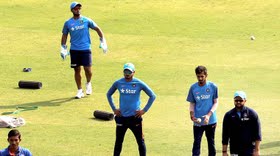 “I think he still has a lot to offer. He has not played in a while because there have not been too many limited overs series since the World T20. We played a lot of Test matches in between so it seems there is a bit of a gap. We still believe he has enough to contribute in shorter formats. I would say it is a series of opportunities for a lot of guys to seal their spots,” the skipper went on to say.