A god-sent opportunity for S. Badrinath

One person’s pain is someone else’s gain, somebody’s loss is somebody’s gain – whichever way you put it, both these clichés fit perfectly on Subramaniam Badrinath. He hasn’t been on the national selectors’ radar for a while now, but the sudden exit of VVS Laxman has given him another opportunity to prove his credentials at the international level.

One person’s pain is someone else’s gain, somebody’s loss is somebody’s gain – whichever way you put it, both these clichés fit perfectly on Subramaniam Badrinath. He hasn’t been on the national selectors’ radar for a while now, but the sudden exit of VVS Laxman has given him another opportunity to prove his credentials at the international level. That the Tamil Nadu batsman wasn’t selected in the original squad for the New Zealand Tests is clear indication that the selectors aren’t too keen on him. One of the reasons being that he is already 31, and doesn’t have more than 5-6 years of cricket left in him. Destiny, however, always has its own say. And so, here we have Badrinath getting an unexpected, and possibly his last shot at international glory. 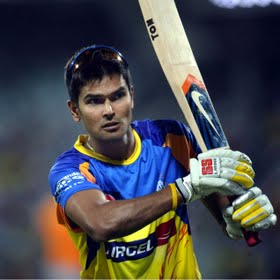 Being called in as a replacement for Laxman, Badrinath should automatically be drafted into the playing XI. Experience gives in him an upper hand over Ajinkya Rahane, who is yet to establish himself at the ODI and T20 level. Badrinath has featured in only two Tests for India, back in early 2010 against the South Africans. And, while he began with a gritty half-century on debut, he looked out of sorts during the rest of the series. Despite possessing a solid technique and a patient temperament, Badrinath was worked over by the Proteas, as result of which he ran out of the favour with the Indian selectors.

Now, in his second coming, the Tamil Nadu middle-order batsman will need to utilise all his domestic experience in his endeavour to revive his fading international hopes. He has been among the most consistent performers for Tamil Nadu in the last decade, and the only reason he did not get an opportunity to represent India earlier than 2010 in Tests was because there was never any vacancy in the middle-order. Only injuries to key players allowed him the chance to make in his Test debut against the South Africans.

In spite of his failures at the international level, it also has to be remembered that he has played only two Tests and seven ODIs, not enough to judge a player. And he has shown glimpses of promise, especially when he guided India to victory in a tense chase on his ODI debut against Sri Lanka, at Dambulla in 2008. It wouldn’t be entirely wrong to say that the selectors haven’t been completely fair in their treatment to him. All that is a thing of the past though, all that matters now is how Badrinath performs against New Zealand, that’s if he gets an opportunity.

Critics may point to the domestic giant’s age, and suggest that the selectors are moving in a backward direction. However, there are exceptions like Mike Hussey, Matthew Hayden and Robin Singh, whose careers actually kicked off in their 30s. All is not lost for Badrinath, not as yet.