A reassuring yet unconvincing win for India

India’s 2-0 triumph over New Zealand was least surprising. However, the manner in which victory was attained was in part satisfying, but in a way also disappointing.

India’s 2-0 triumph over New Zealand was least surprising. However, the manner in which victory was attained was in part satisfying, but in a way also disappointing. It was a win for India’s next generation to cherish, with the youngsters guiding the team home in both the Tests. At the same time, the seniors, now without support from Rahul Dravid and VVS Laxman, were below par. Against a weak New Zealand India got away with their failings, but while facing tougher opponents like Australia and England they may have to pay a heavy price. 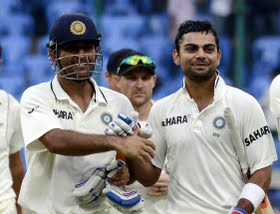 First, the positives. Comeback man Cheteshwar Pujara made a wonderful ton at Hyderabad, and looked good in the second innings at Bangalore as well before throwing it away. He is certainly one for the future, and though these are still early days in his career, the initial signs are encouraging. The slightly more experienced Virat Kohli reiterated that he is not just an exceptional ODI player, but a highly dependable Test bat as well. Each time he took guard at the crease, he contributed significantly. More importantly, he has looked unruffled in the middle. Even when India were in danger of throwing the game away at Bangalore, Kohli stood firm and guided the side home.

Meanwhile, India’s new spin twins continued their domination with both R. Ashwin and Pragyan Ojha troubling most New Zealand batsman. Seeing the duo in action, one was transformed back to the 90’s when Anil Kumble, Rajesh Chauhan and Venkatapathy Raju ran through opponents at home. Though their match-winning efforts have come against weak opponents at home – West Indies and New Zealand – it is nonetheless encouraging to see them succeed in tandem. Their next aim should be to become a force to reckon with on away pitches as well.

Even amidst the triumph, the major worrying factor was the below par performance of the three men, who were expected to be the lynchpin of India’s batting line-up. Virender Sehwag got three starts, and threw away all of them, we hope it wasn’t for lack of motivation. As for Gautam Gambhir, he certainly has got into a mental block over certain strokes that are getting him into trouble often. He tried to hit out of his worries during India’s chase at Bangalore, but his attempt was only a mini-success. And what do we say about Sachin Tendulkar. Three innings, all three times bowled, and not even a 50 to show. In Tendulkar’s ‘defence’, it can still be said that age has caught up with him, but the Indian openers are still in their early 30’s, and if their struggles have already begun, India’s batting department is in big trouble.

The New Zealand Tests will soon become history, and India will now have to take the positives and head into bigger challenges ahead, against England and Australia. They are well aware of their frailties. It remains to be seen what kind of improvement they display in the remainder of the home season.