Sri Lanka lost the warm-up game against Australia. Even so, Lasith Malinga was seen teaching the art of slow bowling to Marcus Stoinis.

Sri Lanka lost the warm-up game against Australia. Even so, Lasith Malinga was seen teaching the art of slow bowling to Marcus Stoinis. Malinga did not feature in the game but that did not stop him from giving tips to the Aussie who is considered among the most dangerous all-rounders today.

The official handle of the Cricket World Cup shared a video of Stoinis taking notes from Malinga. Speaking to journalists after the warm-up match, Malinga said, "I wanted to give him tips, that's how cricket moves forward. Whoever wants to know, I will help them. I'll share tricks on how to bowl slow balls, which situation you will use it, why you want to use the slow one."

"Variations is very important in the short-format game. During IPL also he had wanted to know how I bowl," Malinga added. 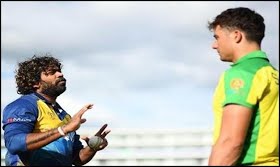 Sri Lanka's wretched form continued as they lost both their warm-up matches. The Islanders begin their World Cup campaign with the match against New Zealand at Cardiff. Australia, on the other hand, will take on Afghanistan at Bristol.