Don't mind batting at No.4, hints Russell after a narrow defeat against Bangalore

Andre Russell continued his stunning form with the bat as he blasted 65 from 25 balls. Nitish Rana also slammed a sensational 85 from 46 balls.

Andre Russell continued his stunning form with the bat as he blasted 65 from 25 balls. Nitish Rana also slammed a sensational 85 from 46 balls. However, it was still not enough as a superlative hundred from Bangalore captain earlier in the day had led the team to 213. In response, Kolkata feels just short by 10 runs after, at one stage, it seemed they wouldn't get anywhere close to the target.

Speaking after the match, Russell suggested that he should bat higher up the order for Kolkata to have a better chance of winning games. On Friday, Russell walked in with the asking rate at nearly 17 and yet took Kolkata to the brink of victory.

"Look, we were chasing 214 runs and weren't in the best state when I went out to bat. When Nitish asked what I thought, I said 'I bat one way - and that's positive.' To go out there and chasing 14-15 per over, it's not the best way you want to start as a batsman. I'm used to these situations, but why I say it's a sweet and sour feeling is because we need to learn from this, as a team. We need to learn that we can get 214. And to lose by 10 runs, well, we were just two hits away," Russell said candidly at a post-match discussion. 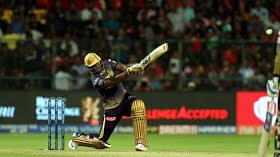 When asked if he felt he should bat higher up the order, Russell replied in the affirmative, saying, "I believe that. Honestly, you have to sometimes be flexible as a team. When you look at the make-up of our team, I don't mind going to bat at No. 4."

While Russell won the first two matches for Kolkata from next to impossible situations, he felt that bat higher up the order would work in their favor as the opponents would use their best bowlers against him. "When I'm at the crease, Virat Kohli will bowl the best bowlers to get me out, and those best bowlers will, therefore, have fewer overs remaining in the back end.

"So even if I score 60 off 25 balls and give the team the early pump, then the type of bowlers like Dale Steyn will have only one over to bowl at the death, or they may bowl out. So I think me going to bat early would definitely be good for Kolkata, but with our make-up as a team, yeah, that's a good answer."

The West Indian all-rounder also felt that Kolkata did not enough urgency in the middle overs while which meant there was no momentum at all in the Kolkata chase, which eventually hurt them.