As England clean swept Sri Lanka 3-0 in the Lion's den, Root and company were hopeful of setting the record straight in terms of their below-par overseas Test record. However, as the year moved on, defeats against West Indies, New Zealand and now the first Test against South Africa, have pulled them back to square one. 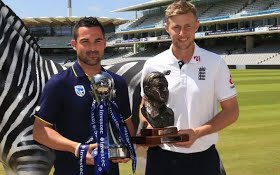 One can argue that the flu had a role to play in their 107-run defeat to South Africa in the Boxing Day Test, but it is difficult to shy away from the mistakes that the England Test unit has repeated over and over again throughout the last couple of years. However, if you were looking at cricket world cup odds it would be a different matter as England were favourites going into the Tournament in 2019 and ended up World Cup winners. But one would argue that ODI is a completely different game to Test cricket and that England have struggled to find consistently in the longer format.

Starting on a poor note

England have lost five of the last six opening Test matches of their away series. It began with a 10-wicket loss against Australia in the 2017-18 Ashes. The team then lost by an innings and 49 runs to New Zealand. Their 381-run loss against West Indies and an innings loss against New Zealand further added to the tally.

The only time they have won the opening Test match of an away series in the last 6 series was against Sri Lanka in 2018, where they beat the hosts by 211 runs at Galle.

This series against South Africa is England's 23rd series since the beginning of Ashes 2013-14. In series that have a minimum of two Test matches, the team has lost at least one Test in 21 of these. England have managed to win at least one Test in the series only twice, both against Sri Lanka - the first in 2016 at home and the second in 2018 away.

England's first innings collapses are not an exception to the rule any longer. They collapsed for a mere 85 in their one-off Test against Ireland in July. The following Ashes series also saw similar figures, with them getting dismissed for just 67 in the third Test.

The Boxing Day Test had shades of the same, with England losing 7 wickets for just 39 runs.

Skipper Joe Root also conceded in the post-match presentation that it is the first innings where they are losing initiative more often than not and ending up chasing their tails throughout the match.

Getting bundled out for just 181 when the pitch was decent for batting did not help their case against South Africa. The fact that they reached 268 in the fourth innings was actually commendable, but there was very little chance of them actually winning this one.

The fact is that the team should have never let South Africa set them a near impossible target of 376 in the final innings, when the Centurion pitch was doing all sorts of tricks.

"The thing that is frustrating is that when we find ourselves behind the eight-ball in a game, we show a lot of character, a lot of fight and determination and find ways of getting ourselves back into fixtures. We need to do that at the start of the game. We need to get ahead of it and when we get the opportunity to turn the screw, we need to take it both with bat and ball. That's where the game was won and lost this time round. We have to learn that lesson very quickly," Root said after the defeat.

This weakness has to do with England's home conditions, where things tend to happen quickly. Over the years, England have got used to getting 3-4 wickets each session and when that does not happen, the bowlers as well as the captain becomes fidgety. Instead of homing in on a length and waiting for the batsmen to make mistakes, the bowlers begin to try one too many things and end up conceding a lot of runs.

Similarly, while batting, if the opposition manages a stranglehold on them and does not allow them to score freely, the batsmen lose their wickets in a bid to up the ante.

Failing to mop up the tail quickly

In the last two years, when bowling to batsmen from number 8 to number 11 in Tests, England have not managed to pick wickets in heaps. Instead, in fact, they have averaged 19.2 to nos 8-11 batsmen in Tests, as opposed to the average for all wickets being at 15.4.

This is in contrast to teams like New Zealand and Pakistan who average 10.1 and 11.8 against the lower order. Only Ireland, Afghanistan and Zimbabwe have performed worse than England in this respect.

Just four wins out of 12 Test matches is not what England would have expected at the beginning of 2019 but now that this year is already behind them, they would expect to start 2020 on a winning note.

Who will win the 2nd Test - South Africa or England?

On current form, South Africa will win the 2nd Test and unless England can find some batting backbone, in their middle order, another series Test win seems a long way off ; and with the Ashes coming up next winter, in Australia, England will have improve hugely to have any chance of winning back the Ashes there.

For a full live cricket streaming schedule and other news stories you can go to any cricket news website or you can watch all the action on the Sky Cricket channel in the UK.

Whatever the result, both teams will be going out there to win and with the new management structure at Cricket South Africa, you must fancy that the Proteas will come out on top again.