Rohit or Rahane : Who should lead in Kohli’s absence?

Indian skipper Virat Kohli has decided to leave the Australian tour after the first test in Adelaide, in order to be present with his wife, as the pair are expecting their first child. That has created a sense of anxiety in the Indian camp, as his absence has not only created a huge hole in the side’s batting, but it also means that someone else will be leading the Indian team in whites, something that hasn’t happened in more than three years.

Ajinkya Rahane seems to be the frontrunner to take up the role, as he has been the vice captain all these years. He has also captained the team in the longest format, though just once. That one match was a decider, as the series was tied up at 1-1, coincidentally also against Australia. He made a bold move by going ahead with five bowlers, and emerged victorious. He has captained India a few times in the shorter formats too, but still remains a relatively inexperienced skipper. His form has been dwindling of late in the tests, and even failed to make it to the eleven for a few of the matches. However, till date he has played 65 tests, and his batting average still remains above 40. He has been termed as one of the most complete Indian batsmen, especially overseas, which should give him the edge over his Mumbai teammate. 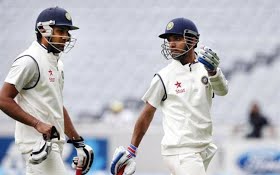 Rohit Sharma, on the other hand, is a seasoned T20 leader and has just led Mumbai Indians to a record fifth title. He even has a great record of leading India in the shorter formats in the limited opportunities that he has gotten, being Kohli’s deputy for ODIs and T20s. He is yet to cement his place in the longest format though, and that makes one wonder whether it is the right time to hand him the reigns in Kohli’s absence. Ever since his most recent IPL triumph, there have been calls to make him the permanent T20 captain, and some have even suggested making him the captain for the last three tests of the Aussie tour. While Rahane’s form has been deteriorating, Rohit’s has been on the upswing as he amassed three centuries (including a double) in the home series against South Africa last year. The only impediment in Rohit’s way to become a successful test match player is that he is yet to prove his calibre in overseas conditions in the longest format.

While Rohit might very well captain India across formats in the future, it looks like the management might make Rahane the stand-in captain for the last three tests, given Rahane’s superior record in away tests, and the fact that Rohit will be returning from an injury. Irrespective of who captains India, we are set for a thriller of a test series, as the top two sides will lock horns against each other, starting 17th December in Adelaide.