Australia were firm favourites as they took on West Indies in the fifth ODI of the tri-series on Monday. Apart from a loss to South Africa, they had tasted two comprehensive wins, one each against the hosts West Indies and the Proteas.

Australia were firm favourites as they took on West Indies in the fifth ODI of the tri-series on Monday. Apart from a loss to South Africa, they had tasted two comprehensive wins, one each against the hosts West Indies and the Proteas. But, with West Indies there is always that unpredictability factor that is both their strength and weakness as well. Against the Aussies on Monday, it was definitely the former. After failing to picking up regular wickets in the first 30 overs, they came back very well in the last 20 to restrict the Aussies. Then, with the bat in hand, their willow hitters came to the party to ensure that the series remained three-way traffic.

It has been mentioned often before in the series, that for West Indies to do well they will need big contributions from Marlon Samuels. The explosive batsman had failed to perform in the previous matches, and it had hurt the team. But, against the Aussies on Monday, he did exactly what was expected of him. Samuels has a decent record against the Aussies, a country where he made his international debut a decade and a half back, and was highly impressive. Samuels brought all his experience to the fore against the Australian attack. His 92, studded with 8 fours and 4 sixes was instrumental in taking the hosts home, although he must be disappointed missing out on a hundred.

While Samuels led the charge in the chase, a number of other batsman also made crucial contributions, something West Indies missed when they were rolled over for 116 in the previous match against the same opponent. Chasing a challenging score, West Indies were looking for a good start, and they got exactly that as Andre Fletcher and Johnson Charles added 74 for the opening wicket in just under 10 overs. After Fletcher and Charles were dismissed, Darren Bravo carried on the good work, in the company of Samuels. The partnership put West Indies in command, before Denesh Ramdin played a nice cameo to inch West Indies even closer.

Australia had their moments in the match, but they failed to grab them, rather uncharacteristically, and fell behind in the process. Opening the batting in the absence of David Warner, Usman Khawaja batted exceedingly well for his 98. But, his runs came at a strike rate of 79, which is too low by modern-day standards, and Australia were clearly missing their trump card. Steven Smith too got a half-century, but he too scored at the same pace. Thus, in spite of two big scores, the run-rate never got into troublesome areas for West Indies. George Bailey's sprightly half-century ensured that Australia finished with a fighting total. 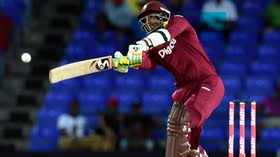 Although the West Indian bowlers did not claim a lot of wickets, Jason Holder was impressive leading from the front with figures of 2 for 44. Sunil Narine did not claim any scalps, but went at under five runs an over. And, while Carlos Braithwaite was slightly expensive, he picked up a couple of crucial wickets. As for the Aussie bowlers, it was an off-day. They never really got into any kind of rhythm. Josh Hazelwood was alright, but Nathan Coulter-Nile was taken for plenty. James Faulkner and Travis Head too did not make much of an impression with the ball. But, Adam Zampa's failure was the biggest disappointment of all. The Aussies had been depending on him to deliver, but the Windies took a liking to him.