We were outplayed in the series: Upul Tharanga

Sri Lankan captain Upul Tharanga has admitted that the hosts were not good enough, after being trashed 5-0 by India at home

Sri Lankan captain Upul Tharanga has admitted that the hosts were not good enough, after being trashed 5-0 by India at home. Speaking to the media after the last match, he said that the team lacked consistency, and did not bat or bowl well.

“We were outplayed in the series. Disappointed with batting. India were very consistent. We failed to get big scores. Indian top order was making plenty of runs,” said Tharanga.

Asked about what he felt was wrong with Sri Lankan cricket, “As a batting unit we failed to post decent totals. Even after five games we failed to post 250 runs even once. Feeling very disappointed with that. These batting displays are worrying. Even today (Sunday) we could have made about 270 or 275. We were well placed, but like in the last few games we collapsed. We lost some seven wickets for 53 runs. That has been something that is happening frequently now.” 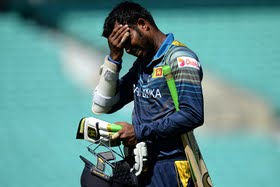 Probed further about the failure of the openers, Tharanga observed, “Dickwella and Danushka are attacking batsmen. We have given them the freedom to use the Powerplay. But we have told them that if you get a start, you need to go on. When you are batting in the Powerplay you score about 30 or 40 runs and you should go on. We failed to achieve that even after five games. Not a single century in the whole series and that has been a letdown for us.”

There have been reports of Tharanga planning to give up captaincy. Responding to the reports, he clarified, “No reason for that. Next selectors will decide how we will move forward. We didn't play well. Last two years we have not played well. Only these set of players can come out of it. We need to plan better. We need to identify what are the areas we can improve on.”