Ashwin, Ojha spin India to an innings and 115-run victory

R Ashwin claimed a match tally of 12 for 85 as New Zealand crashed to an innings and 115 run-defeat in the Hyderabad Test. It was all over very quickly for the Kiwis as they got bundled out in their second innings for 159 in 61.3 overs. The tourists lost their last seven wickets for just 26 runs!

R Ashwin claimed a match tally of 12 for 85 as New Zealand crashed to an innings and 115 run-defeat in the Hyderabad Test. It was all over very quickly for the Kiwis as they got bundled out in their second innings for 159 in 61.3 overs. The tourists lost their last seven wickets for just 26 runs!

The writing was on the wall for a Kiwi defeat once the final session started. The first to depart post Tea was Doug Bracewell (1), who edged a turning ball from Pragyan Ojha to gully where Virat Kohli took a dubious low catch diving forward and got away with it. R Ashwin then cleaned up the remaining three wickets in a hurry – Kruger van Wyk (missing a reverse sweep to get hit on the thigh by a carom ball for an lbw), Trent Boult (edging a straighter one to slip) and last man Chris Martin (lbw after not reading a carrom ball pitching on middle).

R Ashwin was the Man of the Match for completely dominating the Kiwis and getting them out effortlessly in both the innings. 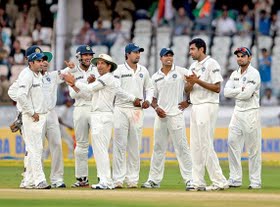 Update at Tea on Day 4: New Zealand are facing an inevitable defeat in the final session after going to Tea at 146 for 6 in 73 overs. There is no real batting left with the Kiwis with the Wicket Keeper Kruger van Wyk and Doug Bracewell at the crease followed up by the tail.

After a wonderful first session, New Zealand’s luck ran out as Brendon McCullum was adjudged lbw to an inswinger from Umesh Yadav despite getting an inside edge to end his patient knock of 42 (from 130 balls). McCullum had batted out for 45 overs showing resolute defence to the Indian spinners before falling to the pace of Yadav. India got a quick third wicket after this with Skipper Ross Taylor (7) dangerously leaving a turning off break from R Ashwin which pitched outside off but turned in through to hit his off stump.

The Kiwis managed to get a bit of partnership going between the solid Kane Williamson and Daniel Flynn. However, against the run of play, Kane Williamson (52 from 163 balls) poked at a turning and bouncing delivery from Pragyan Ojha which was angled in, and the result was a straightforward nick to slip. Immediately after Williamson’s exit, Daniel Flynn (11 from 54 balls) got out playing another poor sweep shot to what was a flatter and fuller delivery from Ashwin which drifted in to have him lbw. Just a few minutes before Tea, Ashwin produced an unplayable quicker off break which drifted in on the shorter side and James Franklin (5) to his shock saw the ball explode away off the foothole with plenty of turn and bounce to find his edge. It needed a blinder of a one handed diving catch to his right from Sehwag to finish the dismissal of Franklin.

Update at Lunch on Day 4: New Zealand had a fantastic morning session which began as late as 11:00 AM but lasted one and a half hours. India bowled as many as 25 overs but failed to break the overnight partnership between Brendon McCullum (39* from 124 balls with 3 fours) and Kane Williamson (31* from 96 balls with 2 fours). The Kiwis worked hard to reach 92 for 1 in 43 overs and are now trailing behind by 187 runs.

Update at 9:30 AM: The fourth day’s play of the Hyderabad Test is unlikely to start in the morning session because of heavy showers overnight and light rain this morning. There are hardly any spectators in the stadium as well because of the rain that has been pelting down in most parts of the twin cities – Hyderabad and Secunderabad. This will be a frustrating wait for India as play hasn’t got underway since yesterday afternoon around 2:00 PM. India are in the driver’s seat with the Kiwis 41 for 1 following on with a deficit of 238 more runs to clear.