IPL 2020 Match 23 RR vs DC: All round Delhi annihilate Rajasthan

Marcus Stoinis and Axar Patel starred with both bat and ball as the Delhi Capitals completed a comprehensive win over the Rajasthan Royals to regain the top spot in the points table. Delhi’s bowlers were disciplined and their fielders backed them by taking some tough catches in the outfield, led by Hetmyer.

Steve Smith won the toss and chose to ball and Jofra Archer gave his team a fiery start as he picked up Dhawan early on. Shaw was trying to hit every ball out of the park, as the result of which he top edged Jofra to give the England pacer his second wicket in the powerplay. Iyer was looking solid and raced to 22 but was run out after a mix up with Rishabh Pant. Delhi had put up runs on the board but their batsmen were looking to be a bit too aggressive, as they were reduced to 51-3 at the end of powerplay. 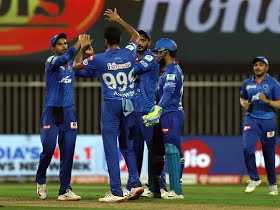 In form Stoinis came to bat and deposited the loose deliveries offered by Gopal out of the park. Just as runs were coming, Pant suffered a brain fade moment as he strolled for a non existent single, and was found short of his crease. Stoinis too got out soon after that as Delhi found themselves at 122-5 with five overs remaining, and it seemed like they would have to settle for a below par score on a belter Sharjah pitch. But we were in for a boundary show as Hetmyer slammed five sixes and a four en route to his 45. Axar Patel too struck a useful 17 off 8 as DC finished at a competitive 184-8. Jofra Archer registered excellent figures of 3-24.

Chasing 185 shouldn’t have been a mountain to climb for Rajasthan, given their solid top order. But they didn’t get off to the best of starts as Jos Buttler was caught brilliantly by Dhawan in the third over of the innings. Skipper Steve Smith showed a lot of intent and didn’t allow the required rate to climb up too much, but Yashasvi Jaiswal struggled to get going. With only 16 runs off his 24 balls, the youngster was putting pressure on his skipper at the other end, who took a risk and perished off Nortje as Hetmyer took a wonderful low catch.

Danger man Samson was expected to pull his team out of troubled waters, but he too perished cheaply as the match was slipping out of RR’s hands. Ashwin and Stoinis came back to pick Lomror and Jaiswal and Rabada dismissed Archer as Rajasthan only had a slimmer of hope in the form of Rahul Tewatia. The former Delhi Capitals allrounder tried his best with a fighting 38 off 29 but ran out of partners as Rabada rattled the lower order with three wickets to win the match by 46 runs.