Kohli's India the best in the world: Atapattu

Former Sri Lankan skipper Marvan Atapattu feels that Virat Kohli's Indian team is presently the best side in world cricket. Atapattu admitted that he was disappointed with Sri Lanka's 9-0 pasting by India.

In an interview to International Business Times Atapattu said, “Now India is the best not only in the sub continent but outside too. Sri Lanka, unfortunately, have been having problems. I will stay away from using the word transition because that has been going on for too long for my liking. When you look at the players and the group, obviously you feel that they lack self-confidence.”

He was also asked about whether he felt Kohli is the best batsman in the world. “Virat is batting as well as anybody I have seen in my career. If he continues to bat this way, obviously it doesn’t have to come from me, he will go past everybody. But in reality, cricket won’t stay the same. 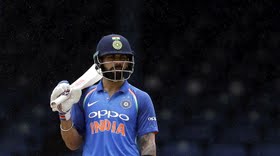 “There will be both good and bad times. The important thing is how he comes out of bad times when he gets into. It happened to him in England but he came out of it. But it (bad form) won’t happen to him too many times. Certainly, he is the best in world cricket today,” Atapattu added to International Business Times.