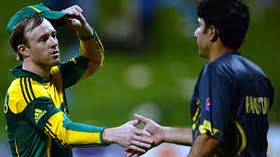 Pitch report :Usually once a series is won there is not much to get excited about but this is a little different. Pakistan, who have already racked up what their captain Misbah-ul-Haq called "a really big achievement" by beating South Africa for the first time in a bilateral series, stand to add to it. Victory at Centurion will make them only the second team to whitewash South Africa in an ODI series of three matches.

Although South Africa will be concerned with avoiding that fate, they also have the smaller picture to consider. While the Twenty20 side has found its rhythm, the ODI outfit cannot seem to do the same. Batting inconsistencies continue to work against them and even though one game cannot help them fix it, it may be an opportunity to solve some problems.
Without Graeme Smith and Jacques Kallis, some of South Africa's next generation will be on display and with public speculation mounting about whether there is space for the two stalwarts in the set-up, this will be the chance to see. The middle-order focus will be on David Miller, who hasn't been his usual destructive self, with the bowling expected to perform as they have throughout the recent ODI matches.
Pakistan will also want batting improvements if there are to seize their chance for total domination. Even if their top-order fail again they will back their bowlers to make up for any lapses, as has been the case in the opening two rubbers.
Along with a South Africa revival, Pakistan's goal may be spoiled by afternoon thunderstorms which have come down all week and are forecast for Saturday. Should the heavens open again, it may put an early end to the series which is now in its sixth week of limited-overs clashes.
The promising start Henry Davids made to his international career unravelled in his last six T20s. He has only managed single-figure scores, appeared to be struggling on subcontinental surfaces and against quality spinners but was also asked to bat in the middle order, where he was more exposed. He has not played an ODI for South Africa yet, although he has the domestic record that suggests he should have, and it may be a chance to show he has what it takes to play at the highest level. On his home ground in a dead rubber, Davids will be faced with pleasant pressure although he may still bat outside of his preferred position in the top two.
Ball by ball updates
Full Scorecard
Last Five Match Result :
Pakistan WWLLLW (last five completed games most recent first)
South Africa LLWWW
Match Stats :
The last time South Africa lost all the matches scheduled in a one-day series was against Sri Lanka in 2004 when they were defeated 5-0 away from home. Before that, they were last swept in England in 1994.
Excluding series against Bangladesh and Zimbabwe, Pakistan last swept a one-day series away from home in 2005, 3-0 against West Indies
Teams:
South Africa team: GC Smith, AB de Villiers, JH Kallis, M Morkel, DW Steyn, HM Amla, JP Duminy, VD Philander, LL Tsotsobe, WD Parnell, R McLaren, DA Miller, Faf du Plessis, Imran Tahir, Quinton de Kock
Pakistan team: Mohammad Hafeez, Misbah-ul-Haq, Shoaib Malik, Sohail Tanvir, Shahid Afridi, Nasir Jamshed, Saeed Ajmal, Abdul Razzaq, Abdur Rehman, Umar Amin, Ahmed Shehzad, Umar Akmal, Asad Shafiq, Junaid Khan, Anwar Ali, Bilawal Bhatti, Sohaib Maqsood