India bowled out all the ten wickets of South Africa in 27.1 overs and restricted the guest team for a paltry 99 runs in the third and final match of the bilateral ODI series. Wristspinner Kuldeep Yadav grabbed four wickets in 4.1 overs and spared just 18 runs. He was announced Player of the Match. Washington Sundar, Mohammed Siraj and Shahbaz Ahmed shared 2 wickets each. 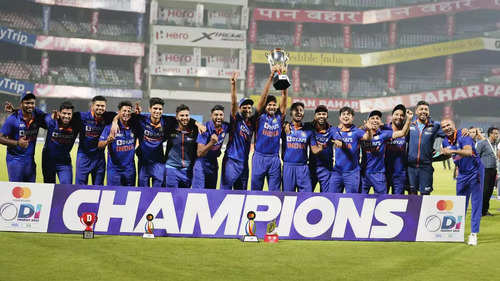 With the victory, India has won the series by 2-1. Mohammed Siraj was announced Player of the Series. Indian captain Shikhar Dhawan said, "I am proud of the boys, the way they played in the series. The way they carried the responsibility and showed maturity. We showed a lot of character in the first game, we dropped a few catches, but we never really put pressure on ourselves."

The bilateral series with South Africa was the last international preparation for India for the ICC Men's T20 World Cup scheduled to be held in Australia from October 16 to November 13. The multi-nation event will be featuring sixteen teams and 45 matches.

The inaugural match will be played between Namibia and Sri Lanka at the Kardinia Park stadium in Geelong while the first match for India is scheduled against Pakistan on October 23 at the Melbourne Cricket Ground in Melbourne.

Jasprit Bumrah has been ruled out due to back injury. Ravi Bishnoi, Deepak Chahar, Shreyas Iyer, Mohammed Shami are standby players for the event.