It is not official yet but, in all probability, South Africa are likely to get knocked out of another World Cup without managing to go all the way. Following the defeat against Pakistan, a game they should have won, it was imperative that South Africa beat Australia on Sunday to brighten their chances of progressing to the semi-finals.

It is not official yet but, in all probability, South Africa are likely to get knocked out of another World Cup without managing to go all the way. Following the defeat against Pakistan, a game they should have won, it was imperative that South Africa beat Australia on Sunday to brighten their chances of progressing to the semi-finals. Leave aside winning though, they were nowhere near competitive as well, with Australia overpowering them in all departments of the game. Of course, it did not help the Proteas that Shane Watson was in prime form again with bat and ball, picking up his fourth man of the match award in a row. However, even leaving the Watson factor aside, South Africa’s performance wasn’t befitting that of a top T20 side. It just hasn’t been in this World T20. 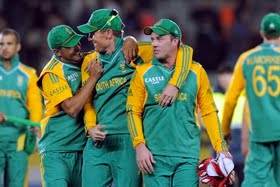 At the outset, the South Africans have just looked an unsettled outfit, whether in the batting or bowling department. One of the major reasons why the Proteas have struggled is because of the failures of Richard Levi. Coming into the tournament, there were high hopes from the youngster who bludgeoned a decent New Zealand bowling attack en route to the fastest T20 international hundred. Sadly, but for an impressive half-century against the weak Zimbabweans, Levi has been an embarrassment. Against Pakistan, he was bowled through the gate attempting a lavish reverse sweep and, against Australia, he had no answer to Xavier Doherty. Australia had planned the spin trap for Levi, who conveniently fell into it.

The performances of South Africa’s senior batsmen have also not helped their cause. Hashim Amla, the team’s go to man in the ODIs, hasn’t made any impact in the tournament as yet. Even if he does now, it might probably be a bit too late to help the side’s cause. For some reason, Amla just hasn’t looked the part, probably he still needs time to figure out his T20 game, and this event wasn’t the place to do that. So much was expected of Jacques Kallis, especially with the bat. But, even he has failed to live up to reputation. And when a T20 side’s top three flounders, there is little chance of that team doing well.

Amidst all the disappointments, J P Duminy has been the one man who has held things together for South Africa time and again. Unfortunately, he hasn’t got enough support to rescue the team from poor positions. It hasn’t helped that A B de Villiers isn’t willing to promote himself up the order. It is pretty much a known fact that de Villiers is the team’s best player in the shorter formats, but the responsibility of captaincy seems to be shrouding his thinking.

The way Albie Morkel gets treated in this side – sometimes in, sometimes out – is the perfect illustration of South Africa’s present mindset – confused. When they take the field against India, the least they can do is be clear about what combination suits them best. It’s about time.