Having been thrashed in the first Test at Headingley, Sri Lanka had immense scope for improvement going into the second match at Durham

Having been thrashed in the first Test at Headingley, Sri Lanka had immense scope for improvement going into the second match at Durham. And, although they again went down, they definitely put up a much better effort. For starters, they took the match into the fourth day despite following-on. Sri Lanka’s batting effort in the second innings was truly commendable. They knew they were always battling a losing cause, and yet preferred not to go down without a fight. The series may be well and truly out of Sri Lanka’s grasp, but they will go into the final Test with better confidence.

As in the first Test, the game was lost by Lanka and won by England in the former’s first innings. Having conceded close to 500, Lanka’s batsmen needed to rise to the occasion. Instead, they faltered for just over 100, thus making the result of the game a formality in the process. The ball was definitely playing tricks, and Sri Lanka’s batsmen, barring Kusal Mendis, to an extent, did not display the technique and temperament to make an impact. The entire team only lasted 43.3 overs, and that was not enough for them make a match out of it. 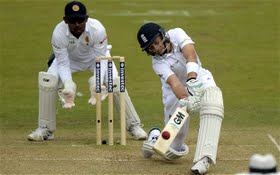 The positives for Sri Lanka, however, arrived in the second innings, as they followed on. The surface had eased to an extent for sure. But, credit must go to the batsmen for applying themselves. Dinesh Chandimal finally proved what he is capable of with a hard-fought century. He must however continue to work on his consistency. Skipper Angelo Mathews also fought hard for his 80. What stood out about the visitors in the innings was that they stood up to the challenge from start to end – Kaushal Silva and Rangana Herath chipping in with fifties.

England’s bowling was exposed to an extent as Sri Lanka made them stay out in the field for more than 128 overs. But, that often happens when a team asks the other side to follow-on. Overall, their bowling performance was impressive. James Anderson again stood out, with three wickets in the first innings, and five in the second. Stuart Broad again did well in the first innings with four scalps. Chris Woakes was splendid with 3 for 9 when Sri Lanka batted first, but could not make much of an impression the second time round. Of all the pacers, Steven Finn had a forgettable time.

There was not much for England to be displeased about their batting. Moeen Ali came up with a much-needed hundred batting lower down the order. Alex Hales got another 80 to keep his Test career afloat while Joe Root missed a chance to get another hundred. If anything, another failure for Nick Compton would worry them. The match also saw England skipper Alastair Cook cross the coveted 10,000-run mark. With the series in the bag, England must look to go all-out, and come up with a crushing effort in the next Test.