IPL T20 2016 1st Match Preview: Defending champions Mumbai Indians will take on Rising Pune Supergiants, who are making their debut, but are strong on paper.

Defending champions Mumbai Indians will take on Rising Pune Supergiants, who are making their debut, but are strong on paper, in the star-studded opening match of the Indian Premier League (IPL) 2016 at the Wankhede Stadium in Mumbai on Saturday. IPL has never been short of controversies, and this season has been no different, with a case being brought up before the Bombay High Court, in regards to the drought issue and water usage by the MCA. The court has allowed the opening match to go ahead, but did pull up the BCCI, stating that they are guzzling water even as Maharashtra is battling drought. The teams will have to put these things beyond as they step on the cricket field. 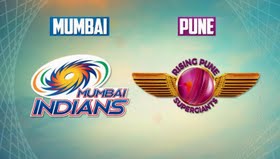 Mumbai will be gung ho as a new season begins. Their victory last year marked the most incredible of comebacks. Mumbai began the season by losing four games in a row, and yet ended up winning the final. They have retained most of their key personnel, and will begin IPL 9 as one of the favourites. Lendl Simmons, who was one of the stars for the team in the unbelievable turnaround, returns to the venue where he played that blazing knock in the WT20 semis to knock out India. Simmons will again be expected to make important contributions along with skipper Rohit Sharma. Ambati Rayudu, Jos Buttler, Corey Anderson and Kieron Pollard are the other star batsmen in the team.

In the bowling department, Mumbai will miss the services of the injured Lasith Malinga, at least for the first half. But, the team think-tank has claimed they have adequate cover-ups. Tim Southee and Mitchell McClenaghan are talented pacers, and they also have the in-form Jasprit Bumrah, apart from Marchant de Lange for back-up. The spin department will again be led by veteran Harbhajan Singh, who was part of the Indian WT20 squad, but did not get a chance in any of the games. Mumbai also have some decent all-round talent with the likes of Anderson, Pollard and Hardik Pandya. The last mentioned will be eagerly watched as he showed glimpses of promise during the WT20.

Pune may be a new side, but they have a Chennai hangover of sorts written over their squad. They are led by the CSK captain-coach combo of MS Dhoni and Stephen Fleming. Also, there are a few players who have represented Chennai in the past with distinction. In the current squad, Ajinkya Rahane, who opened for Rajasthan, is likely to open for Pune as well. In fact, Pune have a rather impressive array of batsmen in Kevin Pietersen, Steven Smith, Faf du Plessis, apart from of course captain Dhoni himself. Saurabh Tiwary is also part of the squad, and he can also make an impact if given a chance.

Pune have a more than decent bowling line-up. Dhoni's Chennai teammate, Ravichandran Ashwin, has followed him to Pune. It would be interesting to observe whether Dhoni continues to utilise his services at the beginning of the innings. Ishant Sharma is the other experienced hand in the bowling department. The other bowling options for Dhoni are Aussie leggie Adam Zampa and wrist spinner Murugan Ashwin, who was purchased for a rather high price at the auction. In the all-round department, Mitchell Marsh is the big name along with seasoned IPL players likes Albie Morkel and Irfan Pathan.