England are in control of the Lord’s Test against West Indies after finishing the second day’s play at a solid 259 for 3 in 80.2 overs. Skipper Andrew Strauss led from the front scoring his fifth century at Lord’s. Bad light brought a slightly early close at Lord’s with England into a lead of 16 runs. Andrew Strauss remained unbeaten on 121 (from 249 balls) with 19 fours which is his 20th Test century.

Early in the day, West Indies couldn’t add anything to their overnight total of 243/9 as Stuart Broad wrapped up the innings taking his 7th wicket. Shivnarine Chanderpaul was stranded on 87*. By lunch, England eased to 80 for 1 in 23 overs. Alastair Cook (26) was the only casualty in the morning session when the left hander had chopped on Kemar Roach onto his stumps. 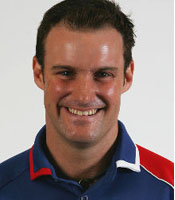 The afternoon session saw a beautiful partnership grow between Andrew Strauss and Jonathan Trott with their respective fifties taking England to 167 for 1 in 51 overs. In the final session, West Indies got the wickets of Jonathan Trott (58 from 134 balls with 6 fours) and Kevin Pietersen (32 from 51 balls with 5 fours) in the final session. Trott was out caught behind to the West Indian Skipper Darren Sammy while Pietersen edged his cut off Marlon Samuels to the Keeper. By the close of play, Andrew Strauss has Ian Bell partnering him on 5*.