Pathetic batting led to India being knocked out

Unlike Pakistan, India knew exactly what they had to achieve to get through to the semi-finals.

Unlike Pakistan, India knew exactly what they had to achieve to get through to the semi-finals. Yet, they failed, and rather disappointingly at that, allowing their arch rivals, whom they beat convincingly in their previous Super Eights encounter, to progress to the semis. India only have themselves to blame for the situation, which meant they were knocked out in the Super Eights stage of the event for the third edition in a row. All this, after winning the inaugural edition amidst much fun fare, and never before seen jubilation. 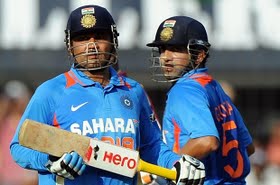 The things that went wrong for India against the Proteas were pretty easy to decipher. Having been put in to bat, India needed a very good start from their openers. But, the fact that both Gautam Gambhir and Virender Sehwag are out of form did not help their cause one bit. Yet again, Gambhir was out playing an innocuous looking strike and losing his stumps. His mode of dismissal was symptomatic of India’s untidy batting effort in the series.

Gambhir’s failures coinciding with India’s also proved how crucial he is to India’s cause. As for Sehwag, the manner in which he threw his wicket away made one wonder whether he was better off sitting behind the fence. For such an experienced player, Sehwag came up with an empty-headed stroke to put India in deep trouble. His failures should no longer be excused under the guise of him being dangerous when he comes off. Virat Kohli also failed for only the second time in the tournament, and it was not surprisingly that India suffered in a big way due to the same. In the only other game that the consistency-personified number three flopped, against Australia, India’s batting crumbled. Going into the tournament, it was clear that their batting was heavily reliant on Kohli, and they paid the price for the same.

The struggles of India’s middle order came to the fore again. Rohit Sharma and Yuvraj Singh looked good during their stay at the crease. But, both fell after getting starts in their endeavour to accelerate. Perceptibly, they were trying to get a huge score on board to give the bowlers their best chance of defending the target by the desired margin. And, while their intentions were right, the execution left a lot to be desired. Most of the batsmen fell playing predetermined strokes, irrespective of the nature of the delivery. In the end, the managed to put up a decent total on the board courtesy late hits by Suresh Raina and M S Dhoni, but the damage done to their innings in the earlier part proved to be irreparable in the end.

The bowlers too did not seem inspired enough to counter a spirited Faf du Plessis. Indian bowlers managed to dismiss the rest of the Proteas batsmen cheaply, but du Plessis’ special knock was enough to knock India out of the tournament. In the end, India did manage to win the close encounter, but it only gave Pakistana reason to celebrate.