Virat Kohli and Steve Smith, who have often been in the battle for the best batsman of the current generation, will lock horns as Royal Challengers Bangalore face Rajasthan Royals in match number 33 of IPL 2020 at Dubai. RCB are well-placed at number three with five wins and three losses. However, they go into the contest having faltered against Kings XI Punjab in the previous game. Royals, on the other hand, are just above bottom-placed KXIP, with three wins in eight games. They go in having lost to Delhi Capitals twice in a week, the latest being by 13 runs.

While RCB are having a memorable tournament, they came up with some inexplicable tactics in the match against KXIP, which actually cost them the game. AB de Villiers, who had made a 73 not out from 33 balls against KKR, was demoted down the order, with Washington Sundar and Shivam Dube coming ahead of him in the name of left-right combination. Both Sundar and Dube struggled to get going while de Villiers also failed as RCB completely lost their way.

With the experiment gone awry, it is imperative for RCB to return to what works for best. So, de Villiers should bat at his usual position, which will give him a better chance of playing a blinder. Virat Kohli has been among the runs consistently, which will please the RCB management. However, the form of Aaron Finch will remain a worry. The addition of Chris Morris, following his recovery from injury, has boosted both the batting and bowling department. 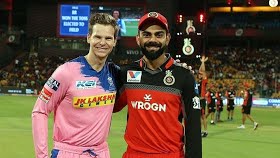 As for Rajasthan Royals, their campaign has completely gone off the boil, but for the surprise win over SRH. Their star-studded batting line-up has let them down big time with Jos Buttler, skipper Steve Smith and Sanju Samson all failing to live up to expectations. Robin Uthappa, who was brought in his for vast experience, has been a complete disaster. Riyan Parag has played only one innings of note. If not for Rahul Tewatia’s heroics, RR would have won only one of their matches till date.

Even in the bowling, Rajasthan have been heaving dependent on Jofra Archer, who has consistently delivered. Tewatia and Shreyas Gopal have had their moments with the ball, but the rest have just not been able to make any impression.

Head-to-Head Record: RR have won 10 and RCB 9 out of 22 matches between the teams. Three matches have produced no result.

The pitch will slow down as the match progresses and will aid spinners. Hence, batting first and putting runs on the board should be the way to go