A thriller, a nail biter, a humdinger - call it whatever you want. We experienced some unprecedented situations as not only the match was tied, but the super over was also tied and we had another super over to decide the winner. Eventually, it was Punjab who managed to get over the line as they edged past RR and CSK to reach the 6th spot on the points table.

Rohit decided to bat first after winning the toss, and both de Kock and him started to stamp their authority right away. Arshdeep however, cut the MI skipper’s innings short as the batsman chopped onto his stumps. Suryakumar Yadav played an irresponsible shot against Shami to be dismissed for a four ball duck. Ishan Kishan followed suit as an upper cut off Arshdeep landed in Murugan Ashwin’s hands.

Reeling at 38-3, MI were in need of some stability. Krunal Pandya joined hands with de Kock to put on 58 for the fourth wicket. While Krunal went for his shots early on, QDK reserved his big hits for the second half of the innings. Krunal holed out to Hooda off Bishnoi and he was replaced by his younger brother. Hardik, after hitting a six off his first ball, was dismissed two overs later. De Kock had helped himself to yet another fifty, his third consecutive one, but got out soon after that as both batsmen were trying to blast every ball out of the park. Pollard 34*(12) and Coulter Nile 24*(12) combined to provide a massive finish to the innings as Pollard smashed four sixes, with the total reaching 176-6. 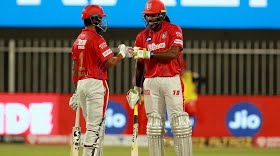 Chasing 177 in what can be described as a must win game for them, Punjab were yet again heavily dependent on their top order. Agarwal had a lucky escape against Boult as MI failed to go upstairs, despite the bowler’s confident appeal. Rahul took on an off colour Boult by smashing him for 20 runs in the third over.

Bumrah however made sure that Agarwal didn’t make them pay for his earlier reprieve as he castled him for the second time this IPL. Rahul and Gayle were still hitting boundaries at will as Punjab reached 75-1 at the end of nine overs.

Rahul Chahar picked up the big wicket of Gayle and it was anyone’s game from thereon. Pooran, who came at number four, struck some lusty blows in his innings of 24 from 12 balls, consisting of two fours and two sixes. Maxwell tried to take on Chahar off his very second delivery, but was caught brilliantly by Rohit Sharma at first slip.

Rahul hit a boundary each in the next three overs as the match was well in control of Punjab but his untimely dismissal at the hands of Bumrah opened the match yet again. With 22 required off 12, Deepak Hooda smashed two fours as the equation was down to 9 from 6. Boult, who was having a forgettable match thus far, turned the tables with some fine death bowling and despite a boundary off an inside edge by Jordan, gave only 8 runs as we were set for the second super over of the day !

Rahul, alongside Pooran came to face the master of death bowling - Jasprit Bumrah. Pooran was dismissed off the second ball courtesy a fine running-back catch by Anukul Roy. Bumrah however, nailed his yorkers just right as Punjab could only manage 5 off the over, also losing Rahul’s wicket on the final ball.

With only 6 required, it should have been a cakewalk for MI, but Shami had other ideas. He also nailed his yorkers to perfection as Rohit and de Kock could manage only 4 runs from the first five balls. With 2 required from the last ball, De Kock was run out on the last ball as we were headed for another super over, third of the day !!

Pollard and Hardik came to bat and Jordan had the ball in his hands. Pollard smashed a boundary off the second ball. Hardik was run out while trying to come back for a non-existent second run. Jordan sprayed a couple of wides and Mayank Agarwal prevented a certain six at the boundary to save four runs for his side as the target for Punjab was 12 runs.

Gayle and Mayank joined hands in pursuit of 12 runs from six balls against Boult. They made light work of it as Gayle smashed a six on the first ball, and Mayank caressed a boundary through extra cover. With only one required from the last three overs, Mayank whipped the ball through extra covers to finally get his side home.