CWC 2015 AUS vs NZ: Desperate situations bring out the best in some players while others crumble under pressure.

Desperate situations bring out the best in some players while others crumble under pressure. New Zealand’s talented Kane Williamson saw the setting at Auckland to become a hero against Australia, and achieved the same displaying unbelievable calmness. He finished the match with 45 not out from 42 balls. At the outset, it hardly reads like a match-winning effort. But, in a game dominated by bowlers from either side, Williamson’s knock stood out. Had he not held the innings together, New Zealand could have completely crumbled, and with it would have lost one of their best opportunities to overcome the Australian challenge in their own backyard. The match was billed up as the one of the biggest of the World Cup in the group stages. After all, New Zealand and Australia are co-hosts, and also two of the favourites to win the tournament. The game lived up to its expectations even though it was a low-scoring encounter. Though the match lasted less than 56 overs, the game was ample proof of the fact that exciting games need not always be high-scoring games. A match dominated by bowlers can be equally exciting, and can deliver some quality cricket as well. 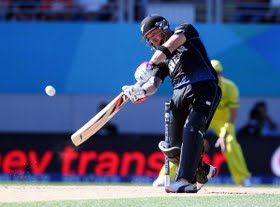 While both sides should be disappointed with their batting irrespective of the fact that a pitch was a tough one for the batters, New Zealand should be extremely pleased with the eventual result. After all, a win by 10 wickets or 1 wicket will give a side the same number of points. The Kiwis were incredible in the field, and their bowlers set up the match brilliantly even though the batsmen almost gave it away in the second half. The most impressive aspect of New Zealand’s bowling display was that they recovered after being belted early on.

It was a wonderful team effort by the New Zealand bowlers, which set up the memorable triumph for the Kiwis. Although Tim Southee was expensive, he claimed the massive wickets of the dangerous Aussie openers. Brendon McCullum’s decision to introduce the experienced Daniel Vettori early into the attack was the game changer as he not only kept the runs down, but also claimed the key wickets of Shane Watson and, more importantly Steven Smith. The most significant contribution of all, undoubtedly came from Trent Boult. He bowled with great pace and accuracy, and his exceptional effort on the day left the Aussies stunned.

Although Australia were poor with the bat, they made up for it with an equally exceptional bowling display. The fact that Australia recovered to almost win the match after yet another blitz by McCullum is proof of their never-say-die spirit. Mitchell Starc showed how well he has matured in the last few months. After taking a battering in the first couple of overs, he recovered sensationally to rock the Kiwi batting with some serious pace. The poor performance of Mitchell Johnson may worry them, but they would like to believe that it was an off-day for him. Their bowlers bowled their hearts out, but in the end, poor batting cost them, as it almost did in Kiwis’ case as well.