CWC 2015: India should be pleased with dominant win over UAE

CWC 2015 IND Vs UAE match Review: Having defeated Pakistan and South Africa handsomely in their first two matches, India would not have been under much pressure in their low-key clash against the UAE at Perth.

Having defeated Pakistan and South Africa handsomely in their first two matches, India would not have been under much pressure in their low-key clash against the UAE at Perth. A victory was a mere formality if India played up to even half their potential. However, what remained to be seen was how ruthless they were going to be against the minnows, who have themselves impressed even in losses. And, the fact that India did not slip up, and came up with an extremely dominating performance was the biggest takeaway from the game for them as they completed a hat-trick of wins. 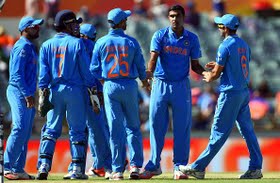 There were positives aplenty for India from the low-key clash. Their bowlers, who have often been under the pump, but have delivered in the World Cup so far, once again came good. Although it was only against the UAE, they did well to keep the momentum going. The good thing for India was that they bowled first this time. India’s wins in the first two games were achieved they batted first, and posted 300 plus totals on the board. The change against UAE should stand the bowlers in good stead as they take on much more stronger sides ahead in the competition.

Off-spinner Ravichandran Ashwin was the most impressive of all bowlers. He was under pressure going into the tournament. Ashwin performed well against Pakistan as well as South Africa. But, this match-winning effort against UAE should boost his confidence even further. It has been a while since Ashwin has come up with a match-winning performance in an international game, and irrespective of the opponent, the effort would please him. The match also gave Bhuvneswar Kumar an opportunity to get his first World Cup game under his belt. Umesh Yadav and Mohit Sharma also got good outings.

Having bowled out UAE for a meagre score, India were always expected to coast to victory. However, Rohit Sharma hadn’t got among the runs in the first two games, and would have been keen for a good score. The opener did well to spend some time at the crease, and coast to an easy half-century. Virat Kohli also took the opportunity to spend some quality time at the crease, and improve his record further. Although, Shikhar Dhawan had a failure, it could be seen as a blessing in disguise, as India would want him to fire in bigger matches.

Although not much was expected from UAE, they would have been hoping to put up a much better showing for sure. In Shaiman Anwar, Amjad Javed, Khurram Khan and skipper Mohammad Tauqir, they have some impressive talents, but on the day, none could rise to the occasion. In the end, UAE’s lack of expertise, and India’s ruthless approach stood out as stark contrasts in a clash that was completely one-sided.

-By A Cricket Analyst