PAK vs ENG 3rd T20 at Sharjah: Chris Jordan was superb in the Super Over

The T20 series was already won when England headed into the third game of the series at Sharjah. However, a game that was supposed to be a dead rubber ended being the closest contest of the series.

The T20 series was already won when England headed into the third game of the series at Sharjah. However, a game that was supposed to be a dead rubber ended being the closest contest of the series. So close that the match went into the Super Over. In such circumstances, a victory is said to be decided more like in a lottery, where luck plays a major role. But, the same cannot be said of Chris Jordan's role for England. He delivered a highly intelligent spell, where he directed full length deliveries into the pads of Umar Akmal and Shahid Afridi, thus stifling them. Jordan conceded only three and although Afridi himself bowled a good Super Over, he did not have enough runs. 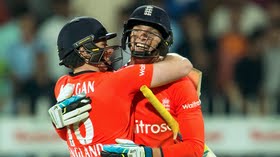 The manner of England's victory was symptomatic of the way Pakistan have faltered during the course of the series. England opted for Jos Buttler and Eoin Morgan for the Super Over. Buttler took a risky second single off the penultimate ball. Under pressure, Anwar Ali failed to gather the ball, and run out Buttler. England thus escaped home, and finished with a memorable 3-0 T20 triumph to add to their one-day glitter. The story of so near yet so far was also repeated during Pakistan's innings. Afridi's men needed only two from the last two balls. But, Shoaib Malik, who had top scored with 75 holed out in the deep, and Sohail Tanvir only managed a single as the match headed into the Super Over.

A Super Over gave Pakistan a second chance at glory, but they should be extremely disappointed in the manner in which they went about the chase of an eminently gettable 155. Run-outs have been a bane of Pakistan in the series, and another one that Sharjah threw the chase out of gear. Mohammad Hafeez has been involved in five run-outs during the course of the matches in the UAE. And that cannot be a coincidence although Rafatullah Mohmand was more at fault as his senior partner was left stranded. But, with the kind of record Hafeez possesses, it is not difficult to understand why Mohmand was hesitant to respond to Hafeez's call.

Shot selection was another aspect that cost Pakistan. In every T20, you need not go out and slog right from ball one. This is where Pakistan lost the plot. Ahmed Shehzad played an ungainly heave and Mohmand walked across his stumps in between Hafeez's run out as Pakistan crumbled to 11 for 3 very early in the chase. To his credit, Malik batted brilliantly in his 75 from 54, a knock featuring 8 fours and two sixes. Mohammad Rizwan and Afridi provided Malik with good support making brisk 20s. But, Pakistan needed at least one of the trio to take them past the finishing line, which wasn't the case.

England themselves pulled off victory from a difficult position. Thanks to some tight bowling, Pakistan had strangled England to 86 for 6, but a 60-run stand between James Vince and Chris Woakes in seven overs helped them recover to a competitive 154 for 8. As partners kept falling, Vince, opening the innings, was deprived of the strike. And when Woakes came in, he outscored Vince during the partnership smashing an unbeaten 37 from 24. Vince was out off the penultimate ball of the innings, having made a rather slow 46 from 45. After the pacers had done the early damage, Afridi shone with commendable figures of 2 for 19. But, as has been the case throughout the series, Pakistan failed to finish off the job.