The first day of the Pallekele Test between Sri Lanka and Pakistan produced a wonderful contest, with the ball dominating the bat right from the word go. If at the SSC batsmen made merry, things were exactly the opposite at Pallekele.

The first day of the Pallekele Test between Sri Lanka and Pakistan produced a wonderful contest, with the ball dominating the bat right from the word go. If at the SSC batsmen made merry, things were exactly the opposite at Pallekele. The match was even at the end of the first day, with Pakistan’s pace bowlers striking crucial blows after the visitors themselves were bowled over for a paltry first innings score. As mentioned in the preview, if Pakistan have to do well their bowlers have to come to the party. And they did exactly did when, after being rolled over by the nagging Lankans, they hit back hard with the ball. 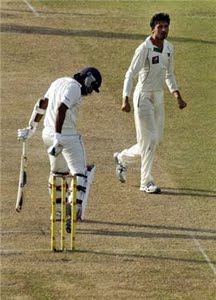 Pakistan were aided by the fact that regular opener Tillakaratne Dilshan opted out of the game to be with his ailing children. And they took full advantage of Lanka’s weakness at the top of the order. With the ball moving around, stand-in opener Dinesh Chandimal was totally out of sorts. Both Umar Gul and Junaid Khan bowled brilliant opening spells, making life tough for Lanka’s top order. Significantly, the three wickets that they got towards the end of the day featured the big ones of Kumar Sangakkara and skipper Mahela Jayawardene, apart from Chandimal.

The great start has given the visitors a chance now to put pressure on the Lankan middle order. Tharanga Parnavitana, who is at the crease, has been struggling for runs, and would be playing for a place in the team itself. Further, among the men to follow, Thilan Samaraweera is an extremely experienced campaigner, but has been out for form in this series. If Pakistan can get him and Parnavitana early on day two, they could still gain the upper hand in the Test, provided they bat well a second time round. This is because apart from Angelo Mathews and, to an extent Prasanna Jayawardene, their lower order batting isn’t that strong. They do have the services of all-rounder Thisara Perera, but while he has been amazing in ODIs, he will find the going tougher in the longer-format. He cannot use the long handle as effectively, and the conditions at Pallekele plus the quality of the opposition’s bowling will test him for sure.

The worrying aspect for Pakistan is the paltry score they have put up on board. Of course, credit must be given to the Sri Lankan bowlers for the manner in which they exploited the conditions, and utilised the opportunity of bowling first on the helpful surface thoroughly. Still, they could have come up with a better effort had they shown some application and patience. Asad Shafiq, who made a stubborn 75, demonstrated that it was possible to play a substantial knock of the pitch, but needed more support from the others. Only Misbah-ul-Haq chipped in with 40.

All said and done, early wickets on day two will be the key to Pakistan’s fortunes in the game.