England eased to a 6-wicket win at Dublin over minnows Ireland in a one-off ODI on Tuesday. Ireland may have lost the match by some margin but it was yet another impressive show from the babies of international cricket.

England eased to a 6-wicket win at Dublin over minnows Ireland in a one-off ODI on Tuesday. Ireland may have lost the match by some margin but it was yet another impressive show from the babies of international cricket. Led by a century from Skipper William Porterfield, Ireland posted a healthy total of 269 for 7 in the allotted 50 overs.

Ireland then had England in deep trouble at 48 for 4 in the 15th over. But the Irish party was spoilt by centuries from England Captain Eoin Morgan and Ravi Bopara. Ironically, Morgan himself is an ex-Ireland cricketer and his century robbed the game from his original country.

Asked to bat first after losing the toss, Ireland were rocked by Boyd Rankin who took 4 for 46 on his ODI Debut for England. Again, the interesting part is that Rankin is also an ex-Ireland cricketer! So Ireland were defeated by its own men who are now playing for a different country. Porterfield who opened the batting for the hosts scored 112 from 142 balls with 14 fours and a six. The 28-year-old left-hander registered his 6th ODI ton while struggling to get any support at the other end. Apart from Rankin, off-spinner James Tredwell bowled well for his 2 for 35 in 10 overs. 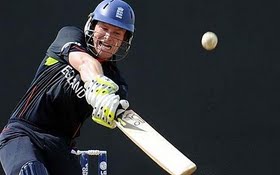 England chasing a competitive target of 270 were shaken up by a 3-wicket haul from the 32-year-old Tim Murtagh who plays county cricket for Middlesex. England’s debutant batsmen Michael Carberry and Gary Balance failed to come up with good scores. Balance in fact was out for a second ball duck to Murtagh.

The visitors were taken home by the pair of Morgan and Bopara who put up an unbroken stand of 226 runs for the 5th wicket in less than 29 overs! The 26-year-old Morgan scored his 5th ODI ton while finishing on 124* from 106 balls with 8 fours and 4 sixes. On the other hand, the 28-year-old Bopara had the opportunity to score his maiden ODI ton. His was a destructive knock of 101* from just 75 balls with 10 fours and 5 sixes. Morgan got the Man of the Match award ahead of Bopara.