If India’s middle order doesn’t perform in Australia, they will struggle: Shoaib Akhtar

Revenge will be on Australia's mind when they face India in a four-match Test series. The last time these two teams met Down Under, India registered their first-ever Test series win in Australia.

India will be led by Virat Kohli in the first Test at Adelaide, which will be a Day/Night encounter. However, Kohli will return to India after the conclusion of the first Test to be with wife Anushka Sharma for the birth of their first child. 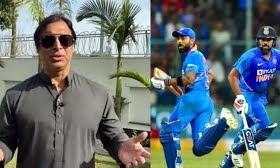 According to former Pakistan pacer Shoaib Akhtar, while India has the ability to win another series in Australia, they may struggle in the event of the middle order not firing.

“In my opinion, India have the ability to win again. But if their middle order doesn’t perform, I see them struggling. People will be watching this series with great interest including myself,” Akhtar was quoted as telling PTI.

Akhtar added that the Pink ball Test, India’s first-ever in Australia, will be another massive challenge for the visitors.

“The day-night Test will be their toughest test. If India play well in those conditions, then you never know. The first two innings of the first Test will tell us where the series is headed.” Akhtar further added.

According to the retired speedster, India’s fortunes could depend on how soon their batsmen adapt to the pace and bounce of the Australian surfaces.

“It takes two-three innings to control that forward trigger movement in foreign conditions. You can’t drive on the up and have to play close to the body,” Akhtar explained.

Meanwhile, in an interview to Times of India, former Australia coach John Buchanan also admitted that India will miss Kohli on and off the field.

"It will definitely be an advantage for Australia because Kohli was one of the dominant players in the last Test series the two teams played. Of course, Cheteshwar Pujara was the star of the series but Kohli's presence in the middle was a huge factor in India winning that series. His presence on the field and in the dressing room will be missed by India," Buchanan was quoted as saying by Times of India.