Touching gesture: Pandya hands over man of the series trophy to Natarajan after T20I series win over Australia

Hardik Pandya, who was named man of the series for his excellent batting in the three-match T20I series against Australia, decided to hand over his trophy to left-arm pacer T. Natarajan, in a poignant gesture. Pandya hammered 78 runs in 50 balls at a strike rate of 156, including an unbeaten 42 from 22 in the second T20I to take India to victory from an improbable position.

Natarajan, on the other hand, ended as the leading wicket-taker in the T20Is against Australia with six wickets from three matches at a strike rate of 12 and an economy rate of 6.91

Speaking after the winning the man of the series trophy, Pandya said, “I'm quite pleased. I felt it was a team effort not an individual one. We all decided after the 2nd ODI that we'll treat this as a four match series now and we were hoping that we would win 3 out of 4 and that's what we got. I think I should head back home and spend some quality time with my family. I haven't seen them for four months.” 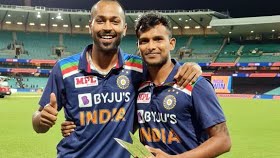 Later, taking to Twitter, Pandya wrote, “Natarajan, you were outstanding this series. To perform brilliantly in difficult conditions on your India debut speaks volumes of your talent and hardwork. You deserve Man of the Series from my side bhai! Congratulations to #TeamIndia on the win.”

India lost the third T20I against Australia on Tuesday by 12 runs, failing in a chase of 187. However, they won the series 2-1 having registered victory in the first two matches.

On the win, Indian captain Virat Kohli said, “In T20 cricket you have to take your chances. I thought when Hardik got going we could pull this one off and eventually we found out we had a bit too much to do in the end. I think the middle overs while we were batting was the phase that cost. If we had one partnership of 25-30 that means Hardik comes in when we need less than 60, not 80 plus.

“This series win is a nice little asterisk for us finishing the limited overs leg of 2020 on a high. I honestly feel that the crowd was a factor as well. It's great we can play in front of crowds in Australia. That gives you another dimension of motivation when you're in a tough situation," he added.

India now move on to the Test series, the first of which will be held at Adelaide on December 17.