Considering how the series had panned so far, an easy victory for West Indies seemed to be a foregone conclusion at St Kitts after the hosts restricted New Zealand to 249.

Considering how the series had panned so far, an easy victory for West Indies seemed to be a foregone conclusion at St Kitts after the hosts restricted New Zealand to 249. However, the struggling visitors did one thing different in this must-win clash, and that made all the difference – they got Chris Gayle early. The swashbuckling left-hander, who had scored four half-centuries in an equal number of games in the series so far, became a victim of the law of averages. Credit, of course, must also go to Tim Southee, who bowled an outgoing delivery that was good enough to find the edge of the in-form left-hander’s bat. 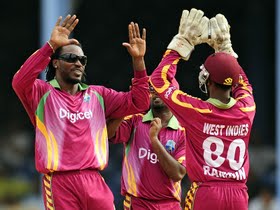 Once Gayle fell, the West Indies’ batting was a far cry from their performance in the earlier games. Gayle’s opening partner, the little-known Johnson Charles hit a couple of boundaries, but could not last long enough. The other more experienced batsmen also crumbed under pressure. Dwayne Smith floundered once again, falling after getting a start. Further, the twin run-outs of Marlon Samuels and Dwayne Bravo did not help matters. Here, praise must go to New Zealand’s fielding, which has expectedly been one aspect where they have done better than the Caribbeans. Still, West Indies’ collapse followingGayle’s dismissal exposed their frailties, which had been masked till now.

In the earlier matches, Kieron Pollard had it easy, since by the time he came in West Indies were already in a strong position. However, at St Kitts, there were under pressure, and Pollard couldn’t pull them out of trouble. Of course, one cannot blame the big hitting batsman alone, for the team as a whole failed. At the same time, Pollard’s struggles symptomised West Indies’ poor batting effort. Andre Russell came up with a wonderful cameo, but it wasn’t enough for West Indies, as they had fallen way too behind by then.

Even as the Windies batting collapsed, in hindsight, New Zealand batted well enough to keep themselves in the hunt. There were three knocks that made the significant difference to the match in the end. The first came from opener Rob Nicol, who batted out half the innings for the half-century. Even as wickets kept falling around him, Nicol ensured that the runs kept coming, at least from one end. Had it not been for Nicol’s innings at the top of the order, the Kiwis could have crumbled yet again.

The innings by Nathan McCullum was equally crucial. His fighting half-century was chiefly responsible for the visitors getting close to 250. McCullum’s partnership with BJ Walting was also important. Watling played a steady hand at a time when New Zealand needed someone to stay at the crease. Unlike in the earlier matches, this time their batsmen were prepared to occupy the crease, which gave New Zealand some much-needed confidence. McCullum also chipped in with the ball, claiming a couple of wickets.

All in all, the early loss of Gayle and some hard-fought batting made the Kiwis click, at last.