Days after former West Indies skipper Darren Sammy alleged that he was subjected to racial slurs during his time with Sunrisers Hyderabad in the Indian Premier League (IPL), a old tweet of his former teammate Ishant Sharma has emerged in which the latter has referred to Sammy as 'Kalu'.

Sammy recently claimed that he and Thisara Perera were referred to as 'Kalu' when they played for Sunrisers, with players even laughing at them. According to Sammy, back then he thought the term referred to a strong black man. However, he has been very angry after recently learning the real meaning of the word. 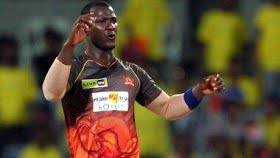 In his recent Instagram post, Sammy said that he is disappointed with his former teammates, and wants an apology. "I was listening to Hasan Minhaj talking about how some of the people in his culture view or describe black people," Sammy said in his latest Instagram post.

"I was angry after listening to him describing a word that they use to describe black people, which he was saying is not in a good way and it was degrading.

"Instantly I remembered when I played for Sunrisers Hyderabad in 2013 and 2014, I was being called the exact same word that he described. All those who used to call me that, you guys know yourselves. Reach out to me, let's have a conversation. Because, if it was in any way, shape or form what Minhaj said it meant, I'm very disappointed," he addded.

"I will be messaging those people. You guys know who you are. I must admit, at the time in which I was being called that, I did not know what it meant," the 36-year-old further stated.

Sammy's outburst is part of the 'Black Lives Matter' campaign, which started to the protest the alleged killing of African-American George Floyd by cops.