You can't just be throwing what could have been such a promising innings: Ponting on Rohit Sharma

Former Australia captain Ricky Ponting feels that Rohit Sharma needs to do a lot more than just get starts if they wants to have a successful Test career. After gifting his wicket away after getting his eye in twice at the SCG, Rohit Sharma did the same on Saturday at the Gabba. The Indian captain eased his way to 44 before playing a terrible shot to get out to Nathan Lyon.

Speaking to cricket.com.au, Ponting said, "It's easy to say that's the way he plays but you've got to be better than that. If you want to be a really good, consistent Test match batsman you can't just be going and throwing what could have been such a promising innings away like he did.”

Punter claimed that Australia had set a trap to make Rohit feel comfortable and then coax a false shot out of him, in which they succeeded. "He got to 44 comfortably, everything seemed to be hitting the middle of the bat, he just started to play some nice drives down the ground,” Ponting added. 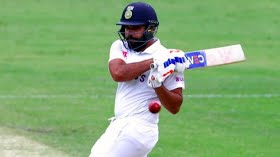 "And the trap was set for him as well, that mid-on fieldsman was three-quarters of the way back, there was also a deep forward square leg, so what Rohit was thinking there we'll never know. I'm sure Rohit would love to have his time over again," he further said.

Rohit, on the other hand, said he is trying to play a role that has been given to him by the team management. At the press conference, he said about his performance, "It's only three innings, of course, I have opened in India in the limited-overs format, it is time for me to test myself in the longer format as well, the team has shown a lot of confidence in my ability at the top.

On his innings and eventual dismissal, Rohit explained, “In the first half of my batting. I was getting closer to the ball and once I am in, I try to hit few shots, in the end, you want to score runs, it worked until I got out.”

India ended Day 2 of the Gabba Test at 62 for 2 in response to Australia’s 369, with rain playing spoilsport.