I would love to play in the Champions Trophy: Ashish Nehra

Although Ashish Nehra has turned into a T20 specialist, having not played international fifty over cricket since the 2011 World Cup

Although Ashish Nehra has turned into a T20 specialist, having not played international fifty over cricket since the 2011 World Cup, he is still hopeful of making a comeback in the format. In fact, he was to be part of the team that will represent India in England during the Champions Trophy in June.

"I would love to play in the Champions Trophy. When you go to England you will take at least four fast bowlers in addition to two spinners. I know I can bowl anywhere: up front, in the middle overs and at death. I can also share the experience I have with the other young fast bowlers," Nehra told ESPNcricinfo. 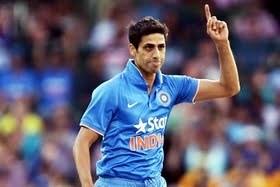 Nehra's last competitive fifty-over match, apart from the practice game against England, was back in December 2015. However, he maintains he is fit enough. "I aim to play at least three matches to build up my match-fitness. Fifty-overs is a different challenge and Vijay Hazare is a good platform to test myself. I bowl about eight overs even in the nets while preparing for a T20 match. It is not about fitness. It is about the feel of playing in a 50-over match."

Nehra claimed 3 for 28 against England in the second T20I. So despite being 38, the left-armer is hopeful of being considered for the Champions Trophy. He admits though that it’s too early to talk about the next World Cup. "The 2019 World Cup is still two-and-a-half years away. We are going to play at least 50 one-dayers in between. For me every tournament is important. I will try to play as much as I can," Nehra concluded.