N Srinivasan, the former Board of Control for Cricket in India (BCCI) president, has said that his company India Cements bid for the Chennai franchise in the Indian Premier League (IPL) after approval from then BCCI President

N Srinivasan, the former Board of Control for Cricket in India (BCCI) president, has said that his company India Cements bid for the Chennai franchise in the Indian Premier League (IPL) after approval from then BCCI President Sharad Pawar and IPL chairman Lalit Modi.

Srinivasan later found himself in a conflict of interest row. "We received an invitation from the then chairman of IPL asking whether India Cements would bid. So I took this letter and wrote to the then BCCI president Mr. Pawar asking if we can bid since I was the BCCI treasurer and MD and promoter of India Cements. Although everyone knew this story, they chose to ignore it,” Srinivasan was quoted as saying in a report by Cricbuzz. 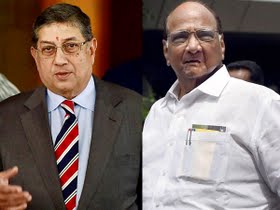 "I get a reply back from Mr. Pawar saying that 'I have consulted all my colleagues and there is no bar on India Cements to take the tender and bid for an IPL team'. This was given in writing from him and following all due processes, the BCCI was asked and we went ahead," he added.

Owing to the 2013 spot-fixing scandal and the investigations, it came to the fore that Gurunath Meiyappan, Chennai Super Kings' Team principal, was involved in betting. CSK were then team was suspended for two seasons 2016 and 2017. Srinivasan, however, says, CSK remains a hit with fans.

"Before the first auction, we told the group which was sitting there to get MS Dhoni at any price. People criticise it and made all kinds of allegations, but still its followers have only grown. Wherever I go, thanks to the power of CSK, there is not a single place where people don't want to come and take a selfie with me.

"How did we get there? The first truly game changing decision was to get MS Dhoni on board. He had won the World T20 in 2007, had his own style and was different from others. An aura developed around the team because of its performance and its captain who was growing in stature, winning with the national team. He adopted the city and vice-versa," he explained in the Cricbuzz report.