The first week really put us back: du Plessis after consolation win over Sri Lanka

Knocked out of the World Cup 2019, South Africa finally produced a clincal performance at Chester-le-Street against Sri Lanka to register their second win of the tournament. After cleaning up Sri Lanka for 203, South Africa chased down the target with ease thanks to unbeaten knocks of 96 and 80 from skipper Faf du Plessis and Hashim Amla respectively. 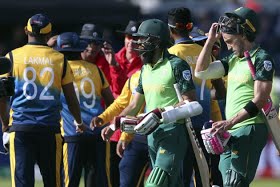 According to du Plessis, it was the loss against Bangladesh that jolted their confidence badly, and they couldn't recover from it in time. "The basics of batting were shown today. We've batted well all through the tournament, but we just didn't have guys batting through. Hashim gave us a good foundation, one big partnership makes it look so much easier. We hadn't done that consistently in the tournament. I think Bangladesh was the one that really took the wind out of our sails."

"England are a very good team and they were too good for us on that day. Bangladesh played an unbelievably good game and that sucker punched us and we almost took the hangover of that game into the next game. The first week really put us back, but we knew that was the case and we can't hide from that," du Plessis said in analytical mode.

South Africa crashed out of the tournament after losing to Pakistan as they had only won one game till then. Although too late, they put their best foot forward against Sri Lanka, to get home with 11.4 overs to spare.

While Amla and du Plessis were the stars with the bat, Dwaine Pretorius and Chris Morris claimed three wickets each with the ball.