What washout means for Rajasthan, Bangalore in terms of play-offs qualification

Rajasthan leg-spinner Shreyas Gopal claimed a memorable hat-trick in a rain-hit match of five overs a side against Bangalore in the Indian T20 match on Tuesday. The game, however, was eventually washed out due to rain.

Rajasthan now has 11 points from 13 games. They now need to win the final game and hope the other results also go their way. With 9 points from 13 matches, Bangalore mathematically doesn't stand a chance to qualify at all.

Rajasthan held Bangalore to 62 for 7 owing to Gopal's hat-trick Rajasthan won the toss and elected to field. Bangalore skipper Virat Kohli slammed 25 from 7 after the rain delay. AB de Villiers and Kohli combined to take 23 off Varun Aaron's first over. 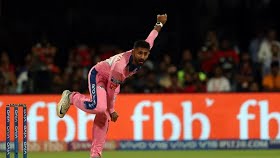 Gopal brought Rajasthan back into the match soon sending back Kohli and de Villiers off successive balls before sending back Marcus Stoinis for complete a hat-trick. Bangalore were held to 62 for 7 in five overs.

In response, Rajasthan were 41 for 1 in 3.2 overs with Sanju Samson on 28 off 13 balls but rain allowed no further play.