South Africa down Sri Lanka in 7-over contest

South Africa eased to a huge 32-run victory over Sri Lanka who found it absolutely hard to score runs quickly against a quality pace attack.

South Africa eased to a huge 32-run victory over Sri Lanka who found it absolutely hard to score runs quickly against a quality pace attack. The Lankans came up with a weak total of 46 for 5 in 7 overs chasing South Africa’s score of 78. The duo of Morne Morkel with 2-0-9-0 and Dale Steyn with 2-0-10-2 were too hot to handle for the Lankans.

South Africa Innings: South Africa are favourites to win the Group C Match at Hambantota after posting a huge total of 78 for 4 in the allotted 7 overs. The outfield is pretty slow because of the rain and hitting boundaries is going to be a tough job for the Lankans. If their batsmen can clear the huge outfield for sixes, then the match will be Sri Lanka’s. 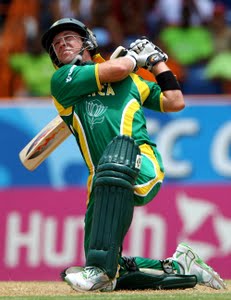 The top scorer for South Africa was Skipper AB de Villiers with 30 from 13 balls with a four and 2 sixes. There was plenty of running from the South Africans while just the 4 fours were possible along with 3 sixes.

Toss and Teams: Sri Lanka have won the toss and elected to bowl first in what is a reduced 7-over contest. The match is all set to begin after a delay of two and a half hours. For Sri Lanka, Ajantha Mendis misses out because of a stiff side and replacing him is going to be Rangana Herath. South Africa have replaced Robin Petersen with Faf du Plessis.

Rain Update: The much awaited Group C Match between hosts Sri Lanka and South Africa looks to be a non-starter because of heavy rain at Hambantota. Both the teams are already into the Super Eights. The big interest of this match is how the South Africans would handle Ajantha Mendis but for that we would need a dramatic change in the weather conditions at Hambantota!