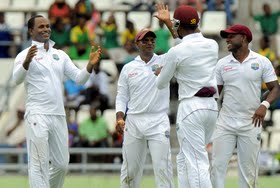 West Indies won by an innings and 65 runs

Shane Shillingford's 19 wkts v Zim are the most by a West Indies bowler in a 2-match Test series.C Walsh had taken 16 v NZ in 1995.

Shane Shillingford gets this 3rd 5-wicket hauls in Tests.

Gayle's completed his 35th Test fifty and his secondfifty against Zimbabwe.

Shillingford is also the first bowler to capture ten wickets in a Test match at Roseau, accomplishing the feat against Australia last year.