MS Dhoni has been ruled out of the Asia Cup in Bangladesh because of a side strain. Virat Kohli will lead India in Dhoni's absence and Dinesh Karthik slots in as the replacement wicketkeeper.

The 12th edition of the Asia Cup will be held in Bangladesh during from February 25 to March 7, 2014.

Total five teams taking part in this tournament. The teams are Afghanistan, Bangladesh, Sri Lanka, India and Pakistan. Afghanistan will be making their debut in the Asia Cup.

The tournament ends on March 8, and the ICC World Twenty20 begins on March 21, also in Bangladesh.

MS Dhoni has been ruled out of the Asia Cup in Bangladesh because of a side strain. Virat Kohli will lead India in Dhoni's absence and Dinesh Karthik slots in as the replacement wicketkeeper. 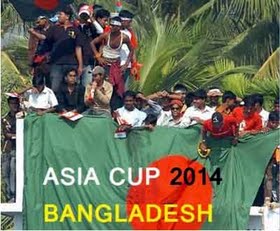 MS Dhoni is out from Asia Cup for his injured. Virat Kohli will lead India in Asia Cup 2014.