Afghanistan have made their World Cup debut. Afghanistan captain Mohammad Nabi walks out along with Mashrafe Mortaza for the toss. Mortaza is the home captain for the purpose of spinning the coin. Bangladesh have won the toss and have decided to bat first. 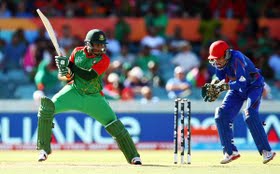 Good show from Afghanistan apart from some 15 overs between 30 and 45. They have bowled well, fielded well, but have also shown lack of experience. Twice they failed to review decisions that would have got them wickets. And big wickets. Fairly good show by World Cup debutants.

Finally a fairly good comeback from Bangladesh thanks to Shakib Al Hasan (63 runs in 51 balls) and Mushfiqur Rahim (71 runs in 56 balls). It's an good target.

Mushfiqur Rahim, the Man of the Match. Credit also goes to openers. They didn't get the runs, but it is not that easy up front. They faced out important overs. Thanks to the crowd. My father is here, my uncle is here, it is a great moment for me.

Mohammad Nabi says Fast bowlers, Mushfiq and Shakib Al Hasan played very well and took the score to 260. We lost too many wickets early, but Nawroz and Sami batted well. Not a good start in the World Cup. We hope to play well in the next match.